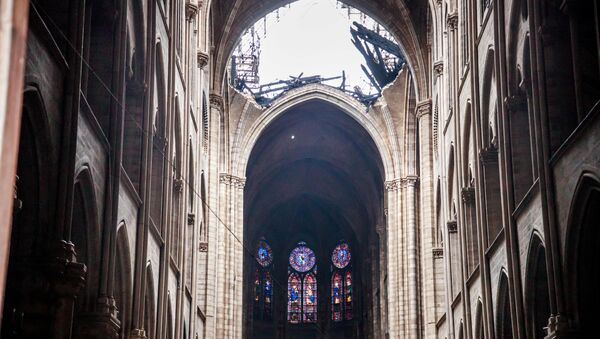 The fire in Paris' Notre Dame Cathedral has shown that flames do not avoid big cities or historic buildings. Firefighters in Paris responded quickly. Sputnik has asked Berlin's fire department: how would the German capital fight a similar blaze? "We are well prepared", the city's fire department representative, Karsten Göwecke, told Sputnik.

"We are ready to take all necessary measures to fight any fire in all buildings in Berlin. This concerns, in particular, large building complexes [and] buildings that are monuments of cultural heritage, including churches". If, God forbid, there's a fire, for example, in the Berlin Cathedral or in the Memorial Church, as happened in Paris, then the Berlin fire brigade, according to Göwecke, is ready for action. "Kaiser Wilhelm Memorial Church is a relatively trouble-free building, because the space where visitors go is partially modernised. There are no problems to be expected".

The Basics of Techniques and Tactics

The "basics of techniques and tactics" are always the same for firefighters. It doesn't matter if the Berlin fire department is putting out a fire in a modern bank or a historic church. "But for us, there are certain differences between different objects, for example, between a single-family house, a multi-storey building, a shopping complex, a railway station, or an object of cultural value. There is a difference in the alert that is raised for fire stations so they take appropriate measures".

The Berlin fire department receives more than 1,000 call-outs each day. "In Berlin, about 500 firefighters are on duty daily, and these are just the professionals. If we alert the volunteer fire brigade, we would quickly have around 300 extra firefighters on duty".

Comparison of Berlin and Paris

In general, the structure of the Berlin city fire department can't be compared to that of Paris. In the German capital, professional firefighters in many cases receive support from volunteers. In Paris, that's not the case.

"About 400 firefighters took part in the nine-hour battle to save the 12th-century Notre Dame de Paris cathedral. In Berlin it would be like this: in such a situation, it would not be a problem to mobilise 100 firemen, and volunteers would join them. In case of a similar fire, like the one that just happened in Paris, we, of course, would be pretty much close to the limit in the number of firefighters, but we wouldn't need reinforcements in terms of personnel. It is possible that we would request additional special forces", Göwecke explained.

Berlin's fire department is overloaded and "has been suffering the effects of austerity policies for many years", MP Marcel Luthe (Free Democratic Party — FDP) criticised the inaction of the Berlin Senate.

"At the moment, we are hiring more personnel, the situation has already improved significantly", the representative of the fire brigade assured in response. "Last year we found ourselves in a situation where the average age of our fire trucks kept going up. Now in the political circles they have realised  that this is a problem". For this purpose, "extra funding of over 100 million euros has already been planned". When it comes to fire stations, "the first important steps have also been undertaken. Many fire stations were renovated as part of a program that has been implemented for several years now. Of course, additional funding is still required. We urgently need an upgrade of our firefighter academy", Göwecke said.

This Tuesday, the radio station Deutschlandfunk reported that another 530 fire engines and emergency vehicles are still needed in the country.

The horrendous blaze broke out at the Notre Dame de Paris on Monday, 15 April, causing the collapse of the cathedral's spire and two-thirds of its roof.