‘You Told Me To': US Cop Kills Man as He Complies With Demands to Disarm (VIDEO) 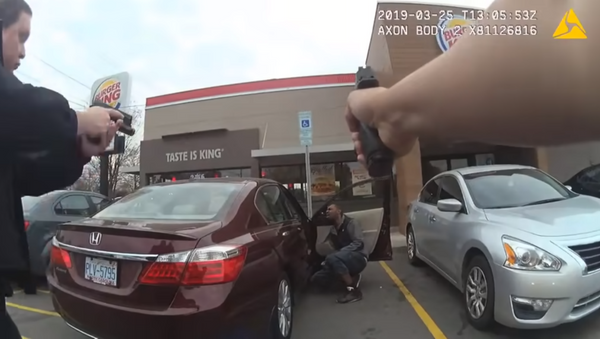 The deadly incident occurred on March 25, and the footage was released on Monday after the department was ordered to do so by Mecklenburg County Superior Judge Donnie Hoover.

Local media reports indicate that officers Wende Kerl and Larry Deal arrived on the scene shortly after dispatchers received two calls at around 9 a.m. local time about an individual who'd reportedly approached a Burger King employee and a customer with a firearm.

Video footage shows Kerl and Deal approaching Franklin, who at the time was squatting next to an open front passenger door of a Honda Accord that was parked outside the eatery. Inside the vehicle was a man who identified himself as the restaurant's general manager.

​Both officers immediately begin demanding that Franklin place his gun on the ground before ordering a concerned Burger King employee to "get out of the way." Franklin is told to disarm at least 24 times by officials before he complies, slowly removing the weapon from his side and beginning to lower it to the ground.

Although Franklin was following the officers' orders, and his firearm was never pointed toward either individual, he was shot twice by Kerl. The last words heard on the recording from a shocked Franklin were "you told me to."

The footage released cuts off as officers retrieve the weapon and instruct the man inside the vehicle to place his hands on the dashboard. Franklin's body is seen lying on the ground. He was transported to a nearby hospital, where he succumbed to his injuries.

Charlotte Mayor Vi Lyles said at a recent press conference prior to the video release that watching the recording was "like a punch to the gut."

"It's hard to watch," she continued. "It's hard to see. Because a life has been lost. Just like any other time you see somebody lose their life."

Lyles went on to note that the incident serves as a reminder that "the responsibilities of law enforcement are, and will always be, immense. In the blink of an eye, their job requires an instantaneous decision, and that's something none of us should take lightly."

After the video's release, multiple protests were held in the community. Some were held to commemorate Franklin's memory, and others called for an end to violence.

Corine Mack, president of the local NAACP chapter, said at one of the events that she felt sick to her stomach after watching the footage. "When I saw that video, I wanted to hurt somebody," she said. "If I felt that way, imagine how the family felt."

According to local news station WCNC, the concerned Burger King employee who was seen approaching the vehicle in the footage was the mother of Franklin's children. She told the station that the family is simply "trying to grieve" now.

"[The children] ask about their daddy all the time, and I make sure I tell them every day that he loved them, and he's is in a better place," she said.

The department's homicide unit is still investigating the incident, and Kerl has been placed on administrative leave pending the probe. According to local station WFTV, an internal investigation into Kerl's actions is ongoing.