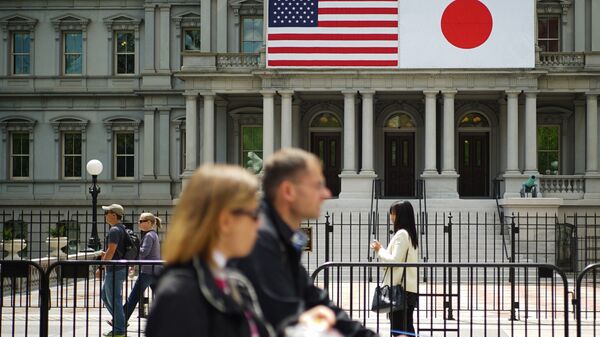 WASHINGTON (Sputnik) – The United States and Japan will continue to expand their alliance based on a shared understanding of security threats to both nations in the region from China and North Korea, Acting US Defence Secretary Patrick Shanahan said during a press conference on Friday.

"Exponentially enhancing our cooperation, capability and capacity in moving our alliance forward…will be critical as we face diverse challenges in the region from China and North Korea", Shanahan told reporters.

US Ready to Disclose Top-Secret F-35 Info to Japan – Report
Shanahan said Washington will maintain a combat-credible force in the Asia Pacific region as a frontline deterrent, while also expanding US cooperation with Japan both bilaterally and multilaterally through joint exercises and other operations.

According to the joint security treaty, the US military has the right to utilise lands and capacities in Japan in order to maintain peace in East Asia. In addition, Japan has been hosting several US military bases on its territory since Tokyo's defeat in World War II.

US, Japan Agree to Enforce UN Sanctions on North Korea Until Full Denuclearisation

Japanese Foreign Minister Taro Kono, in turn, said at a press conference that the United States and Japan share the position that the UN Security Council sanctions on North Korea should remain implemented until the Korean Peninsula entirely destroys its nuclear arsenal,

"The United States and Japan had agreed that we need to implement [UN] Security Council resolution until North Korea CVID [complete, verifiable and irreversible denuclearisation] all the weapons of mass destruction and the missiles of all ranges," Kono said. "Unless they take concrete steps towards CVID of nuclear weapons and missiles, there is going to be no bright future for North Korea".

Kono pointed out that the United States and Japan also agreed to work with other partner-countries on the prevention of illicit ship-to-ship transfers of goods to North Korea in violation of UN Security Council-imposed sanctions.

READ MORE: Japan, US Discuss Trade Ahead of Full-Scale Talks

Fears F-35 Secrets in Danger Rise as US, Japan Yet to Track Missing Jet – Report
Earlier in April, Japan decided to prolong for two years its sanctions on North Korea. The sanctions ban imports of North Korean goods to Japan as well as prohibit entry to Japan of North Korean-registered ships and other countries’ vessels that have visited North Korean ports.

The UN Security Council unanimously adopted Resolution 1718 in 2006 with which it imposed economic and commercial sanctions on North Korea and guiding the Sanctions Committee to monitor the sanctions’ implementation.