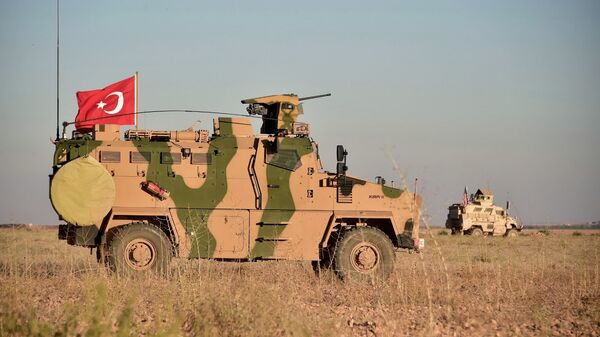 ANKARA (Sputnik) - A safe zone has been "de facto" established between Turkey and Syria right up to the city of Manbij in Syria, Turkish presidential spokesman Ibrahim Kalin said on Thursday.

"Currently a 'de facto' safe zone has been established within the Turkey-Syria border through to Manbij city," he told reporters.

Manbij, a city with some 100,000 people, is located in the northeast of Aleppo province in northern Syria, some 18 miles west of the Euphrates river and is currently the only area still controlled by Kurdish militias on the west bank of the Euphrates.

Over 1,300 Refugees Depart Syria Rukban Camp in Past 24 Hours - Russian Military
Kalin added that Turkey stands for the earliest possible implementation of the Manbij roadmap, and calls for making Kurdish militias leave the east of the Euphrates. Ankara also "expects the continuation of the process of withdrawing American troops from Syria."

Last December, Turkish President Recep Tayyip Erdogan announced that Ankara was ready to launch an offensive against the Kurdish militia in then Kurdish-controlled Manbij. However, following a phone conversation with US President Donald Trump, the Turkish president said that the operation had been postponed. Trump himself announced the withdrawal of US troops from Syria after the same call.

Washington and Ankara have long been at loggerheads over the status of Syrian Kurds. Also Turkey criticized the United States for delivering military supplies to Kurds in Syria.

Turkey has repeatedly conducted operations against the Kurds. In March this year, Ankara announced its operation against the Kurdistan Workers' Party (PKK), which is designated by Turkey as a terrorist group, however, without revealing the targeted area. Back in 2018, Turkey led Operation Olive Branch in majority-Kurdish Afrin district in northern Syria.