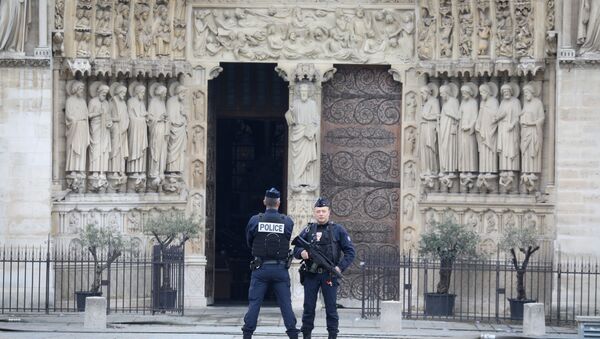 © AFP 2023 / LUDOVIC MARIN / POOL
Subscribe
International
India
Africa
MOSCOW (Sputnik) – The police prefecture of Paris said it had prohibited yellow vest demonstrators from holding a protest on the coming Saturday near the Notre Dame cathedral that has suffered from a massive fire.

"Marches, demonstrations and rallies, mentioned in the first clause… are also prohibited … near Notre Dame de Paris," the police prefecture said in a statement on Thursday.

Electrical Short-Circuit 'Likely Caused' Notre Dame Fire - Police Official
The ban has been introduced due to security concerns and in the wake of a security operation and collection of evidence on the territory of the cathedral, according to the statement.

One of the activists of the movement told Sputnik earlier this week that the protesters did not plan to cancel their 23rd weekend rally due to the Notre Dam fire.

Fire swept the Gothic cathedral this Monday and burned much of its roof and the spire before being extinguished in the early hours of Tuesday.

The yellow vest demonstrations initially started in November over the planned increase in fuel taxes and subsequently grew into a nation-wide campaign against the government’s social policies. The demonstrations often result in looting and riots in Paris and other cities.