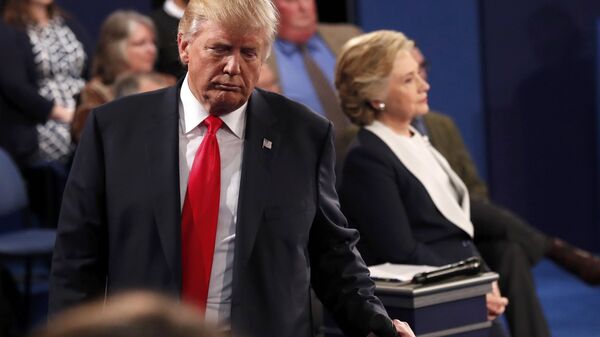 Ekaterina Blinova
All materialsWrite to the author
The much-anticipated report describing Special Counsel Mueller's 23-month probe into the alleged ties between the Trump campaign and Russia was released on 18 April. Speaking to Sputnik, Wall Street analyst Charles Ortel has shared his first thoughts about the document and how it boomeranged at the Democratic Party.

"No Collusion. No Obstruction. For the haters and the Radical Left Democrats, game over", Donald Trump tweeted Thursday, following the release of the much-anticipated Mueller report.

​On 18 April, Attorney General William Barr and Deputy Attorney General Rod Rosenstein held a press conference before the Mueller Report's release. Barr reiterated that the special counsel's probe "did not establish that members of the Trump campaign conspired or coordinated with the Russian government" and dismissed the 10 instances of potential obstruction of justice by Donald Trump outlined by Mueller.

Sputnik has reached out to Wall Street analyst and investigative journalist Charles Ortel asking him to describe his first impression of the document.

No Proof That Russia Affected Outcome of 2016 US Elections

"The special counsel confirmed that the Russian government-sponsored efforts to illegally interfere with the 2016 presidential election, but did not find that the Trump campaign or other Americans colluded in those efforts", Barr told a press conference, citing alleged Russian meddling in the 2016 vote, something that Moscow strongly denies.

Ortel underscored that although the report contains "allegations of suspicious activities", there is "no proof that Russia or any other nation behaved in ways, illegally, that affected the outcome of the 2016 election".

He believes that "Mueller and his team knew early on, and well before the November 2018 election, that there was not an illegal conspiracy among Trump, his campaign, and Russia to interfere in the November 2016 election".

"Keeping the Mueller clouds in place, likely affected our most recent vote, so we deserve to know much more about the evolution of Mueller's conspiracy and collusion findings, sooner rather than later", the analyst stressed.

How Did 'Crossfire Hurricane' Evolve Into the Mueller Probe?

According to Ortel, there are several key issues that the special counsel left beyond the scope of his paper.

"A gaping question, unanswered in Volume 1 of the Mueller Report is exactly who authorised a counter-intelligence operation against Donald Trump, and possibly against campaign associates during 2016, when it appears that such an investigation [FBI's 'Crossfire Hurricane' Operation] was opened, latest by 31 July 2016?" the Wall Street analyst asked.

"I am not a lawyer, but I was under the impression that one distinctive and great feature of the American system of justice is that our government's judicial branch does not investigate people first, rather, if probable cause for specific crime(s) surfaces, prosecutors and investigators work together to secure indictments, and following that point to win convictions concerning actual crimes", he stressed.

Mueller's report isn't just proof of Trump's innocence. It's an indictment of the DOJ and the FBI: McCabe, Rosenstein, Yates, et al.

"the Russian governments efforts are being coordinated with @carterwpage"

​He drew parallels between the so-called Trump-Russia probe and the Hillary Clinton email investigation, referring to numerous instances of a double-standard approach.

"I… see countless double standards at work — think of the lenience afforded Hillary and her team who appropriated all of her 'work-related emails', kept them for almost two years after she left, and then destroyed records that were under subpoena.  Contrast this lenience with the raids against [Paul] Manafort and [Roger] Stone, and the hostile treatment of [Jerome] Corsi", the Wall Street analyst emphasised.

Counterpunch: Trump and Barr Won't Give the Clintons a Pass Now – Analyst
According to Ortel, "the public deserves an explanation for obvious discrimination against Republicans, and protection for Democrats" as well as "true accounting, and a return of equal treatment under the law".

"What I see so far, in the Mueller Report, contrasted with the 'investigation' of Hillary Clinton for mishandling classified information while and after she served as US Secretary of State is a clear attempt by many government officials to rig the Democratic primaries, to rig the general election, and then to impede, if not topple a president-elect, who actually won the November 2016 contest, all of which was financed with US taxpayer money", the Wall Street analyst summarised.

How Trump's Antagonists Fell Flat on Their Faces

The Democratic Party has repeatedly called to release the Mueller Report in full, with politicians and MSM media pundits claiming that the US president could be involved in "collusion with Russia".

No Collusion. No Obstruction. 💯 Exoneration. Jared Kushner and the campaign that I helped run was completely attacked by Democrats without any evidence the campaign did anything wrong.

This scam and web of lies was a clear political attack that should be fully investigated. pic.twitter.com/ttx63wir9V

​Thus, House Intelligence Committee Chairman Adam Schiff claimed that Trump may "face the real prospect of jail time" while Senator Elizabeth Warren went even so far as to presume that the US president "may not be a free person" by the 2020 election.

What you're seeing is unprecedented desperation from the left. They went all in on a collusion conspiracy that never existed, didn't get the result they wanted, and now they're throwing manufactured controversies at the wall to see if anything sticks. It won't work. #NoCollusion

​Ortel noted that having gained majority in the House of Representatives Democrats obtained the power to impeach the president, adding, however, that this initiative would have likely stalled in the US Senate. The impeachment idea has enthusiastically been circulated by the left-leaning media up until the Mueller Report's release.

"With Mueller declining to prosecute for conspiracy, and Barr and Rosenstein declining to prosecute for obstruction of justice, I fail to understand how the House and Democrats ultimately can defend, at the ballot box, wasting many months and burning any chance of working with the Trump Administration to address real issues (immigration, debt, taxes, infrastructure, etc.)", the analyst underscored.

He also referred to Mueller's remark, quoted by Barr, that "while this report does not conclude that the president committed a crime, it also does not exonerate him".

"I am amazed that Mueller would allow the statements about exoneration to surface — these are absurd on their face. Americans, all of us are presumed innocent of crimes until proven guilty, either beyond a reasonable doubt, or by a preponderance of evidence", Ortel highlighted.

Craig's Indictment is a Harbinger of Change

Meanwhile, the Mueller investigation led to the indictment of the Clintons' long-term associate Gregory B. Craig on 11 April.

"Craig, a close ally of the Clintons going all the way back to the early 1970s, has admitted being paid by Victor Pinchuk, a donor through a purported foundation of $10 to $25 million towards the Clinton 'charities', and is claiming that he, a 'super-lawyer' had concluded that this work did not require complying with our Foreign Agents' Registration Act (FARA)", Ortel elaborated.

Wall Street Analyst on 'Explosive Evidence' Against the Clintons, FBI Probe
The analyst deems it "noteworthy that the Mueller team would launch this indictment, and expect Craig to attempt a vigorous defense".

"As a guess, Craig is quite familiar with activities that seem questionable to me involving the Clinton and possibly the Obama Foundations", said Ortel, who has been conducting a private investigation into the Clinton Foundation for the last few years.

The analyst noted that "it is well past time for our president to do all that he and his team can to 'drain the swamp'," stressing that he views "the Craig indictment as ominous for the status quo, for the Clintons, and for many former members of the Obama administration".