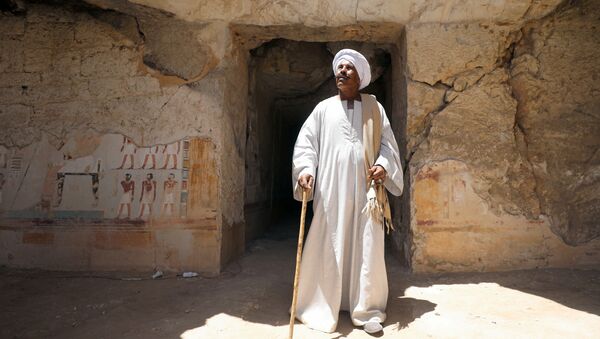 The person interred in the tomb is believed to have been a royal master of seals for ancient kings of Upper and Lower Egypt.

A large tomb of an ancient Egyptian nobleman who likely served King Thutmose I thousands of years ago was unveiled by Egypt’s Ministry of antiquities on World Heritage Day, 18 April 2019.

The 450-square metre, 3,500-year old rock-cut tomb located on Luxor’s west bank contains 18 entrances, and is believed to have belonged to Shedsu-Djehuty, royal master of seals for ancient Egyptian kings of Upper and Lower Egypt, as Mostafa Waziri, secretary-general of Egypt's Supreme Council of Antiquities, explained.

The burial site was discovered by archaeologists in 2018, and underwent extensive renovation before it was finally presented to the public this year.

The discoveries made inside the tomb include colourful floor tiles and wall paintings documenting activities like boat making and hunting.

Earlier, the Ministry of Antiquities also announced the discovery of a Fifth Dynasty nobleman’s tomb, covered in colourful reliefs and well-preserved inscriptions.