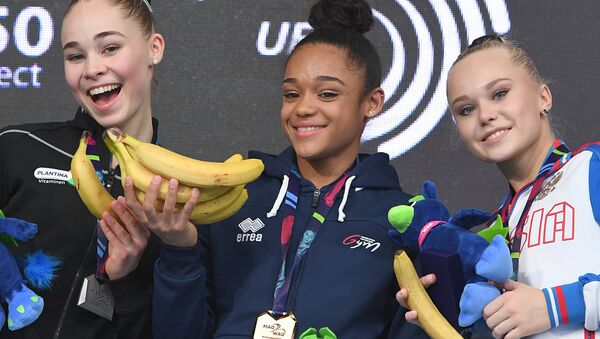 The European Union of Gymnastics choice of awards for tournament participants has apparently become a cause of concern for some social media users who wondered whether it might be interpreted as a racist gesture.

The 2019 European Artistic Gymnastics Championships took on a peculiar turn when it came to presenting the victors with their hard-earned awards.

When the medalists went to the podium, the European Union of Gymnastics’ (UEG) mascot, Luigi the Monkey, personally awarded them with bananas.

Bananas for the winner! Mascot Luigi is such a gentleman! pic.twitter.com/B4VNS1fMnA

This development, however, apparently did not sit well with a number of netizens who began pondering whether the image of a black athlete – specifically, Melanie de Jesus dos Santos who won gold — being given a banana might contain some kind of racist subtext.

So if Melanie, as a person of color, is fine with the bananas which everyone was handed on the podium… is that still racist or can everyone chill now

Everyone was given bananas by Luigi, the UEG mascot who is a monkey 😂 bc you know, monkeys are agile — monkey bars — gymnastics. Hence a logical and nutritious choice!

…it's about the UEG/meet organizers being so blind to the experiences of black athletes that they thought this was a good idea. Though MDJDS wasn't offended, it would have been an extremely negative experience for another black athlete.

Riiiiight? It’s not like if Luigi gave a banana only to Mélanie? I mean why people just can’t chill with this omg. He is a monkey, of course he is going to give bananas omg. Don’t get all the criticisms for this. I found this pretty funny but anywayyyyy pic.twitter.com/TlOW7j11DO

my personal opinion on this banana shit. I don't think it was planned for it to be racist but also ueg should have known better like wtf??? anyways i wouldn't want bananas as a reward anyway. EVERYONE HAS A VALID OPINION ON THIS AND EACH STANCE SHOULD BE UNDERSTOOD & RESPECTED!!