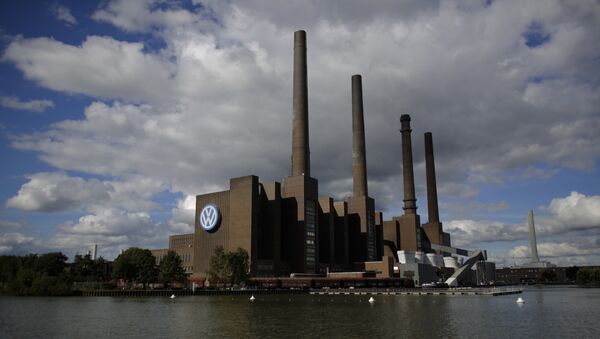 © AP Photo / Markus Schreiber
Subscribe
International
India
Africa
Manufacturing in the European powerhouse remains in a slump, so does factory output across the euro-area in combination with an overall decline in economic activity. This hamstrings the cautious optimism of the European Central Bank, hoping for a stabilisation of the situation.

The beginning of the second quarter has been marked by shrinking factory output in Europe’s largest economy, while manufacturing and a broader scope of economic activity in the region are shrinking, Bloomberg reports, analysing IHS Markit’s data.

The manufacturing PMI (purchasing managers' index) has shown a slump for the last four months, which casts a shadow over the European Central Bank’s hopes for overcoming the decline. While the ECB has decided not to raise its interest rates this year, the German government is expecting the weakest expansion in six years. In contrast to the manufacturing PMI, the composite PMI shows much better dynamics, indicating growth in March.

Nevertheless, the publication of these figures has hit the euro, causing it to fall by 0.4 percent to $1.1252. At the same time, German 10-year bonds rose, bringing the payoff down.

Bloomberg cites IHS Markit’s economist Chris Williamson, as saying that the euro-area data “add to worries that the economy has failed to rebound with any conviction from one-off factors that dampened activity late last year”.

However, experts expect the euro-zone economy to recover, although it will grow “only slightly”, according to Commerzbank’s Christoph Weil.

“However, we still expect the economy to pick up again in the second half of 2019. The headwind from foreign trade should gradually ease. The latest economic data from China point to a stabilisation”, he said as cited by Bloomberg.

This echoed the prediction by ECB Governing Council member, Ewald Nowotny, who expects the stabilisation in the second half of the year.