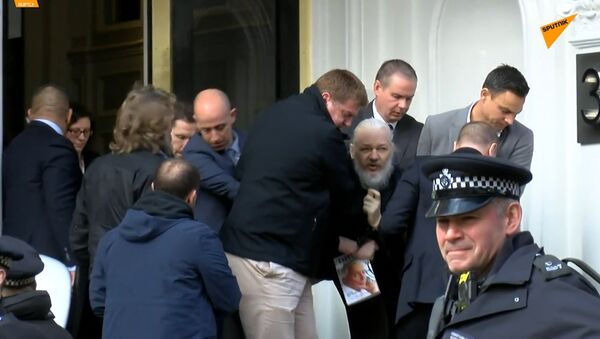 Last week, a bunch of media outlets published a photo of Ecuador’s President Lenin Moreno chilling in bed with a big lobster platter, speculating that the pic’s leak could have triggered the withdrawal of Julian Assange’s asylum status by Quito on 11 April.

In an interview with the BBC, Ecuadorian President Lenin Moreno has revealed the circumstances under which a photo of him enjoying lobster in a posh hotel was taken.

“That was my birthday, I was watching soccer in bed, and it was a national holiday. It was a special day for us and nothing more”, he told the broadcaster about the leaked image.

Moreno was quick to point the finger at Julian Assange and his brainchild, WikiLeaks, for publishing the snap, which was reportedly leaked along with docs ostensibly exposing corruption in the Ecuadorian government and which sparked outrage since it coincided with the president's campaign of pro-austerity measures.

Ecuadorian President Lenin Moreno in a gray t-shirt, smiling as he reclines in a luxury hotel bed with a large platter of lobster. The picture caused uproar in the South American country since it shows the president taking it easy as austerity measures were imposed on his people pic.twitter.com/5ipwqdgSBC

Whille the website has denied any involvement, the lobster-in-bed photo is widely rumoured to have become the last straw leading to the expulsion of Assange from the Ecuadorian Embassy in London.

READ MORE: Photo of Moreno With Lobster May Have Triggered Assange Expulsion – Reports

Assange had been residing in the Ecuadorian diplomatic premises for seven years until 11 April when he was apprehended by British police after Quito revoked his political asylum status for alleged “repeated violations to international conventions and daily-life protocols”.

In the wake of the whistleblower’s arrest Moreno, who was blasted by his predecessor Rafael Correa as a “traitor” for the move against Assange, said that UK authorities had pledged not to extradite him to a country where he could potentially face the death penalty. British police later confirmed that Assange had been detained on behalf of the United States.

Assange Put Excrement on Walls in Sign of Protest, Ecuador's UK Envoy Claims
He was taken to a London court, where he was convicted of skipping bail after an extradition order to Sweden and failing to surrender to the court over a 2012 warrant. In a parallel development, US authorities charged him of conspiring with Chelsea Manning, a former US Army intelligence analyst, to break into US government computers and steal classified data.

Assange, who lept into the international spotlight after his website WikiLeaks published classified documents about US military operations in Iraq and Afghanistan, State Department cables and Guantanamo Bay secrets, received asylum in the Ecuadorian premises in 2012 to avoid extradition to Sweden where he was wanted on rape charges.

The Australian-born journalist flatly denied the allegations, saying that they were politically motivated and designed to have him extradited to the US for the charges were brought up soon after the sensitive docs were leaked.

Even though Sweden dropped its charges in 2017, Assange never left the embassy, since the British police said they intended to arrest him for violating the conditions of his bail.