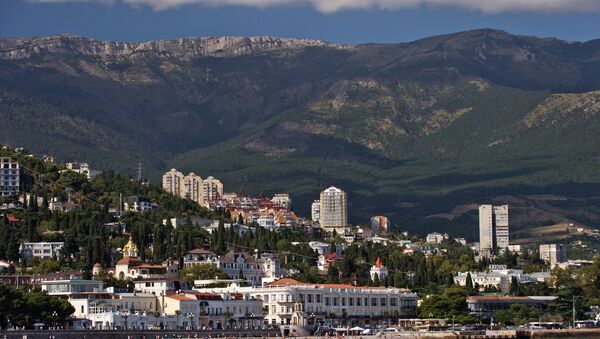 Denis Bolotsky
All materialsWrite to the author
The Yalta Economic Forum is marking its fifth anniversary this year. It is the largest international economic event in Crimea, which reunited with Russia as an autonomous region in 2014 following a referendum. The first forum was attended by 600 delegates, with the number growing every year.

Over 3,000 delegates from across the globe are attending this year’s Yalta Economic Forum held in Crimea. The majority of foreign delegates, including those from EU nations, are taking part in the gathering in spite of the pressure from the media and authorities in their home countries.

On the side-lines of the event, Sputnik sat down with Frank Creyelman, an honorary Belgian MP with the Flemish Interest Party, to talk about the business proposals of the Belgian delegation.

Sputnik: You're a frequent visitor of the Yalta Economic Forum. What's the importance of the event for you and for other Belgian delegates?

Frank Creyelman: This is a well-organised forum, where people from all over the world come, where they mingle and meet each other under a "Russian umbrella", like in the Russian Crimea, which, I think, is very important. And, of course, it's also important for Crimea itself. This time I brought a very small delegation — we have elections in Belgium and in Europe on 26 May, as you might know. So, most politicians are very active. I'm not running, so I'm here, but even if I was running — I would come also, but that's a different story.

Sputnik: You have a busy schedule here at the forum, including meetings with officials of the region. Are there any major deals in the works?

Frank Creyelman: I brought a small delegation of businessmen who want to bring not only commercial, but also political things that are interesting. I can give you a scoop: TUI, which is a Belgian tourism firm — they are very well known, they fly all over the world — they want to open flights from Brussels to Simferopol. So I met Mr Aksenov this morning, and he's very interested in that, because that would mean that the stabilisation of relations — sanctions or not, between a European country, the capital of the EU — Brussels, and Crimea, Russia. So, I think it's very important; we are working on that. There will be problems, but I think we can solve them. That's why this forum is very important.

Sputnik: Over the past few years, Belgian entrepreneurs who have tried to establish ties with Russia, especially in Crimea, have often faced criticism at home — mainly in the mainstream media. Wouldn't the airline face the same problems over its direct Crimea air link proposal?

Frank Creyelman: The pressure in Brussels — it cannot continue like this. Everybody knows that Crimea is Russian — was Russian, is Russian again, and will stay Russian. So, to work with Crimea is beginning to be accepted. A different thing is sanctions — in case of Ukraine, Donbass — it's a different question, because it's all about gas, it's all about Nord Stream 2, it's all about fracking gas from the United States, as you might know. So, that's a different story; we have to work on that more. But, concerning Crimea, I think there is a large consensus growing — it's not there yet, it's growing: "okay, Crimea is Russian, again, so it stays Russian". So, I think we will see the end of sanctions towards Crimea rather soon.