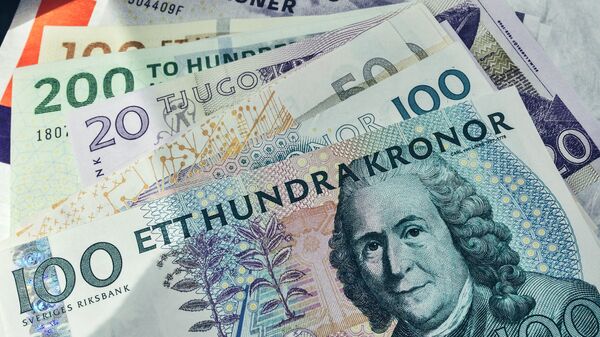 Over the past seven years, the Swedish krona has lost almost 30 percent of its value against the euro and 50 percent against the dollar.

A dismal new forecast by the major Scandinavian bank Nordea predicts that the Swedish currency will depreciate further against the euro in the coming months.

"The total fall in the krona is similar to what one sees in countries where a coup d'état took place," Nordea chief strategist Henrik Unell wrote.

The new loss in value is predicted to continue the current devaluation trend which some have described as a "free fall". Over the past seven years, the Swedish krona has lost almost 30 percent against the euro and 50 percent against the dollar, the newspaper Svenska Dagbladet pointed out.

"In February, the trade-weighted real krona reached its lowest level ever and it surpassed its previous 'financial crisis record'. Swedish households get back only 80 öre for every krona they invest into Sweden as a company. This is a clear breach of contract, but no one protests," Unell wrote.

Unell blamed the weak krona on the Central Bank, whose policy has been to keep Sweden's interest rates among the lowest in the world.

Central Bank governor Stefan Ingves defended his policy by claiming it has led to high employment and better growth.

Unell slammed this stance, suggesting that the Central Bank was "informing the outside world that they in effect ignore all the consequences of their inflation policy".

Today, Sweden's interest rate is minus 0.25 percent. This has been attributed to the low inflation that has haunted Sweden and Europe ever since the global financial crisis broke out just over ten years ago. The Riksbank does not intend to raise interest rates until the summer of 2020 at the earliest.

Henrik Unell predicted that inflation will continue to beset the Swedish Central Bank alongside other central banks in the near future, partly because China continues to produce cheap goods that they export to the rest of the world.

"What primarily depresses interest rates in our part of the world is low inflation rates. And how should they be able to rise when producer prices in China increase by 0.4 percent year-on-year?" Unell asked. "Production costs for goods fall and the ongoing dilution of quality lowers the costs further," he concluded.