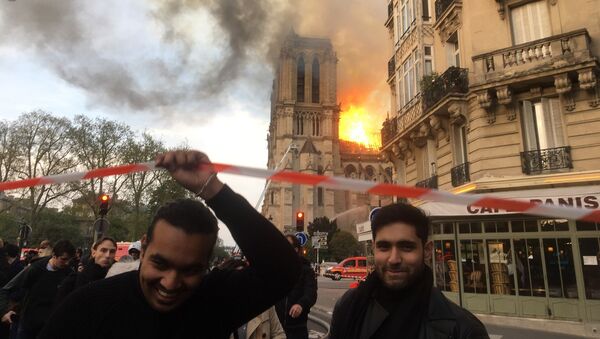 The photograph led PolitiFact to claim that the image of “two smiling men”, who were allegedly doctored into the picture, was used to promote speculation about Muslim involvement in the Notre Dame fire.

PolitiFact, a non-profit fact-checking project, has apparently landed in hot water after it pounced upon an opportunity to debunk a “fake” photo related to the Notre-Dame de Paris blaze, which turned out to be real.

Electrical Short-Circuit 'Likely Caused' Notre Dame Fire - Police Official
The object of their attention was a photo of the cathedral ablaze that was published by Sputnik France and features, among other things, two smiling men slipping under a police barricade.

PolitiFact claims, citing the head of National Center for Media Forensics at University Colorado Denver, that “the two front persons” were inserted into the photo, and that the allegedly altered image "has been used to support claims that the cathedral fire was a terrorist attack and fuelled anti-Muslim rhetoric".

The picture was initially pulled from Sputnik France's live web coverage of the Notre Dame fire and shared over social media. The controversy was sparked as the picture did not contain a company logo or a watermark at the time of its publication. Several users, including notorious bloggers such as Pamella Geller, claimed that the photo depicted 'Muslims laughing as blaze destroys Notre Dame cathedral during Holy Week'. 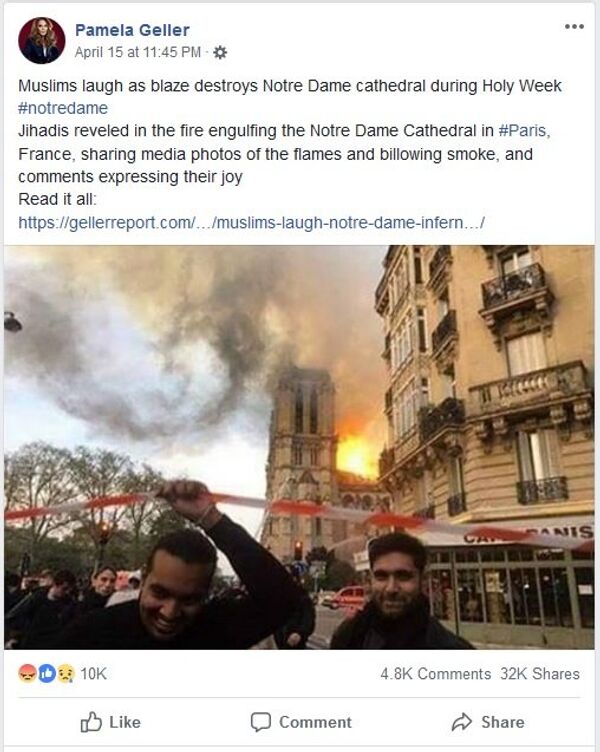 Meanwhile, some media outlets accused Sputnik of being the source of 'hate speech', prompting Sputnik France chief editor Natalia Novikova to lash out against the grievous allegations and the detractors' unfair evaluation of the image.

When Sputnik France chief editor Natalia Novikova berated Aude Lorriaux for her comments about the image and Sputnik as a news agency, the latter deleted her tweet.

As Novikova pointed out, the picture in question was merely one of several photos snapped by a Sputnik correspondent covering the tragedy, and his attention wasn’t even focused on the "smiling men":

"The picture was published without any comments about who these men were or what were they smiling about. They did not attract the attention of our correspondent neither during the photo shoot, nor when the photo was published".

She also remarked that the news agency was quite surprised by the fact that some, apparently, see fit to "speculate about the religious beliefs of these two men based on their appearance only".

"We’re saddened by the fact that some media used this photo for their questionable purposes, and that they spend time on sifting through a hundred of published photos to find an example of ‘Russian menace’", she added.