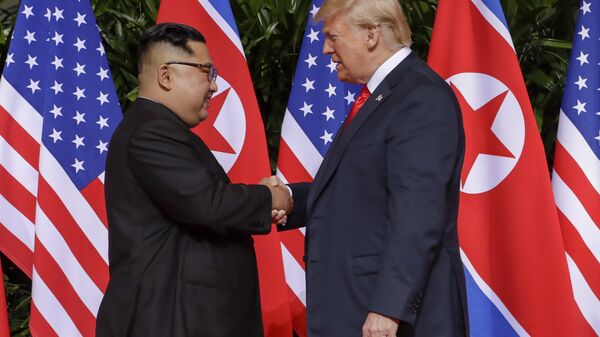 A North Korean Foreign Ministry official has said US Secretary of State Mike Pompeo was “talking nonsense” in suggesting that working-level negotiations between the countries would be finished by the year’s end, reported state-run KCNA.

The official, Kwon Jong Gun added: “I am afraid that if Pompeo engages in the talks again, the table will be lousy once again and the talks will become entangled. Therefore, even in the case of possible resumption of the dialogue with the US, I wish our dialogue counterpart would be not Pompeo but other person who is more careful and mature in communicating with us.”

In addition, Kwon said that Kim remains “on good terms as usual” with US President Donald Trump, perhaps signalling North Korea's desire to drive a wedge between the US president and his advisers, including Pompeo and National Security Adviser John Bolton, who, according to Pyongyang, have been pushing for the country’s complete disarmament before guaranteeing any economic relief.

Speaking at an event in Texas this week, US Secretary of State Mike Pompeo said the North Korean leader had promised Donald Trump to denuclearise, saying “our teams are working with the North Koreans to chart a path forward so that we can get there. He said he wanted it done by the end of the year. I’d love to see that done sooner.”

North Korea’s Kwon blasted the top US diplomat for making “reckless remarks” and “fabricating stories like a fiction writer.”

Meanwhile, US President Donald Trump said on Saturday that a third summit with North Korean leader Kim Jong-un would be a good idea.

"I agree with Kim Jong-Un of North Korea that our personal relationship remains very good, perhaps the term excellent would be even more accurate, and that a third Summit would be good in that we fully understand where we each stand", he tweeted.

The US president went on to praise North Korean potential under Kim's leadership, saying: "North Korea has tremendous potential for extraordinary growth, economic success and riches under the leadership of Chairman Kim. I look forward to the day, which could be soon, when Nuclear Weapons and Sanctions can be removed, and then watching North Korea become one of the most successful nations of the World!"

North Korean leader Kim Jong-Un has sharpened his rhetoric since the summit between his country and the US, urging top ruling party members last week to deal a “severe blow to hostile foreign forces” by resisting sanctions.

Just hours before the KCNA quoted Kwon blasting Pompeo, it reported that North Korea had tested a “new-type tactical guided weapon.” The dispatch announcing the test was brief, noting the missile has a "peculiar mode of guiding flight" and "a powerful warhead," according to the KCNA.

This is the first public weapons test since the 28 February summit between Kim and US President Donald Trump in Hanoi, Vietnam, which ended without a deal on denuclearisation.

The much-anticipated second meeting between Trump and Kim in Hanoi ended abruptly earlier in the year without an agreement after the US refused to offer North Korea any economic sanctions relief.