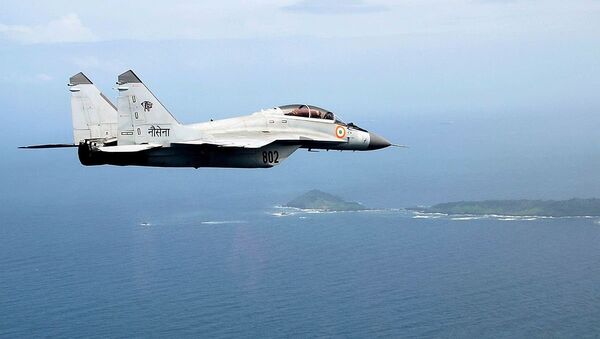 French Rafale aircraft will be pitted against Indian-owned, Russian and Soviet-made MiGs atop a Russian-made aircraft carrier. The event constitutes part of the expanding strategic partnership between the two countries to counter China’s footprint in the Indian Ocean Region (IOR).

New Delhi (Sputnik): The largest-ever joint naval exercise involving the Indian and French navies will take place off the coast of Goa and Karwar from 1 May, reports the English-language daily The Times of India. The joint-exercise has been christened 'Varuna' and will involve major, heavy naval assets like aircraft carriers, naval destroyers, submarines, fighter jets, frigates etc. The naval exercises form part of the expanding strategic partnership between the two nuclear powers.

According to the report, India will deploy its sole aircraft carrier, the INS Vikramaditya, with Russian-made MiG-29K jets aboard. The French navy will field their FNS Charles de Gaulle carrier, which will have Rafale-M naval jets.

"It will be a top-level naval exercise, with intensive dual carrier task group operations and anti-submarine warfare manoeuvres. India and France are also working to implement their action-oriented joint strategic vision for cooperation in the Indian Ocean Region (IOR), which was finalised in March 2018," the Times of India report read, quoting a source.

India to Purchase 21 Russian MiG-29 Jets to Improve Air Combat Strength - Report
France and India have activated a reciprocal military logistics support agreement. This is the second such arrangement for India; the first one was penned with the US in 2016. The Indo-French agreement provides Indian warships with access to French bases along the Horn of Africa, Reunion Island near Madagascar, the naval air station in Abu Dhabi and other bases in south-east Africa.

China's naval and military expansion in the Indian Ocean Region (IOR) has been a cause of worry for India as well as France, as major transcontinental shipping lanes traverse the region.

The 42,500-tonne French aircraft carrier is about 1,900 tonnes lighter than the INS Vikramaditya, nuclear powered and features Rafale-M fighters, E2C Hawkeye early-warning aircraft, the AS-365 Dauphin and other naval helicopters. These will be pitted against Indian MiG-29K fighters and helicopters. The joint-exercise will also feature the INS Shankul, the guided-missile destroyer INS Chennai, the stealth frigate INS Tarkash, the tanker INS Deepak, P-81I long-range maritime patrol aircraft and Dornier planes.

India has been expanding naval collaboration to obtain operational ‘inter-operability' with friendly nations and has just concluded ‘AUSINDEX', the largest-ever Indo-Australian exercise that took place at Visakhapatnam on the eastern coast of India.

India, Japan and the US will hold a trilateral series of joint-exercises, the ‘Malabar Exercises', later this year, the report read.