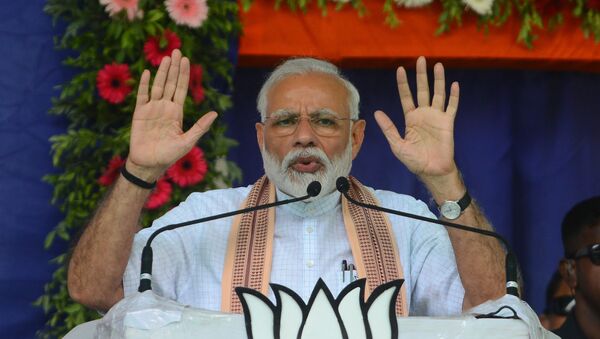 Prime Minister Narendra Modi has claimed that India has the “mother of nuclear bombs”, which is why he said New Delhi will never yield to what he described as Pakistan’s nuclear blackmail.

Speaking at a campaign rally at Surendranagar district, Modi said, in particular, that “Pakistan would threaten us, saying it has the nuclear bomb and will press the button [if India retaliated]”.

“We have nuclear (the mother) of nuclear bombs. I decided to tell them, do whatever you want to do [but we will retaliate]. In the past our people would weep, go around the world saying Pakistan did this, did that […]. It is now Pakistan’s turn to weep”, Modi underscored.

The statement came a few days after he referred to February’s air strikes by the Indian Air Force (IAF) on Balakot, saying that “Pakistan has been threatening us for a long time with its nuclear capability but the IAF called its bluff with its strikes”.

“Those days are gone when India would give in to threats. This is a new India and it will strike terrorists well inside their hideouts across the border,” Modi added.

Earlier, he made it clear that the IAF’s strikes against “terrorist infrastructure” will be India’s new policy, adding that “New India will kill terrorists by barging into their dens.”

Pakistani Army Maj. Gen. Asif Ghafoor, for his part, told Sputnik in late March that Islamabad is ruling out the possibility of using its nuclear weapons and sees it as more of deterrence tool to prevent actual wars.

"Since we have gone overtly nuclear, as India also, in 1998, our stance is that this capability eliminates the possibility of conventional war between the two states. So that is to say, this is a weapon of deterrence and a political choice. No sane country having this capability would talk about using it,” Ghafoor emphasised.

All this comes against the background of ongoing tensions between India and Pakistan, which escalated in late February when each side allegedly  lost a warplane during a dogfight over Kashmir.

India Asks if US Military Was Present at Pakistan Bases Before Dogfight - Report
The 27 February air battle came a day after the IAF launched a strike in Pulwama against what New Delhi said was a Jaish-e-Mohammad camp; members of the group are considered terrorists by India and located on Pakistani soil across the so-called Line of Control, separating India- and Pakistan- controlled areas of Kashmir.

The Indian airstrike was preceded by an attack by Jaish-e-Mohammad on the Indian paramilitary police force in Kashmir in mid-February which killed over 40 servicemen. While India accused Pakistan of supporting the militants and having a “direct hand” in the incident, Islamabad rejected the allegations.