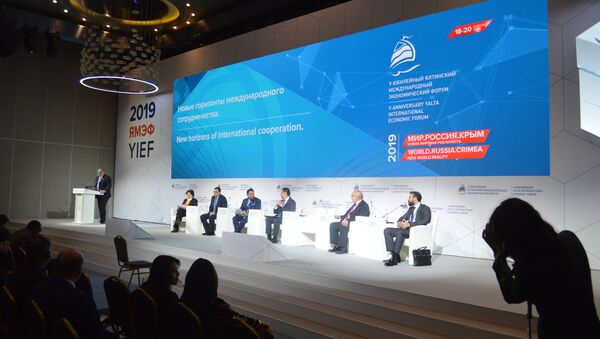 Denis Bolotsky
All materialsWrite to the author
More than 3,000 delegates from all over the world are taking part in this year’s Yalta Economic Forum in Crimea. Most foreign delegates, especially those from EU countries, opted to participate despite pressure from the mainstream media and authorities at home.

In the hallways of Crimea's Mriya Hotel you can easily bump into politicians, entrepreneurs and NGO activists from all over the world — everyone from Nicaraguan presidential adviser Laureano Ortega, to German Bundestag deputies from the AfD Party, are attending meetings and panel discussions, with topics ranging from the global economy to international politics.

@MFA_Russia spokesperson Maria #Zakharova held a briefing at the Yalta Economic Forum venue. One of the big topics is situation in Venezuela, which, just like Russia’s Crimea, is being pressured by the US sanctions. pic.twitter.com/4sg0MRhjTe

Lifting the EU's anti-Russia sanctions, which were first imposed in 2014 and extended many times since, was a key subject for some forum attendees.

Despite attempts by the EU to enforce the same narrative across the Union when it comes to pressuring Russia, many people in Europe think otherwise. In 2017 Austria’s city of Linz voted against anti-Russian sanctions. Former deputy mayor Detlef Wimmer is a frequent guest in Yalta pic.twitter.com/kmoL9IIMxT

"I've always been against European sanctions," Wimmer told Sputnik. "But I also think it's good to build bridges right now, so when sanctions are lifted, or even 'loosened', there would be a good chance, a good opportunity to strengthen investments if people already know each other."

Russia
Over 3,000 Participants From 60 States to Attend Yalta Int'l Economic Forum
Many EU politicians, including delegates from the Alternative for Germany (AfD) Party, had to deal with enormous pressure from their home country's authorities and the mainstream media. Even though the AfD did not send an official delegation to the Yalta Forum and its members arrived in Crimea in a private capacity, they were criticised heavily by both mainstream German TV channels and politicians.

Although such a reaction to virtually anything Russia-related is typical for the mainstream media and governments in many European countries, some forum delegates believe the situation can be changed, perhaps even over the next few months.

Christian de Foulo, the chairman of the Brussels-based Association of Accredited Public Policy Advocates to the EU (AALEP) NGO, says that the period right after the upcoming European parliamentary elections in the summer of 2019 gives a window of opportunity for "friends of Russia" in Europe.

"The sanctions currently extend until the 31st of July. But Juncker is gone, Mogherini is gone, Tusk is gone, and the new parliament is coming on the 2nd of July," says de Fouloy, who is taking part in Yalta Forum. "That means that we have to anticipate and proactively defend our position on the lifting of sanctions and also recognition of Crimea."

The Yalta Economic Forum is celebrating its 5th anniversary this year. It is the largest international economic event for Crimea, which re-joined Russia as an autonomous region in 2014 following a referendum. The 2015 event was attended by 600 delegates, with the number growing gradually each year.