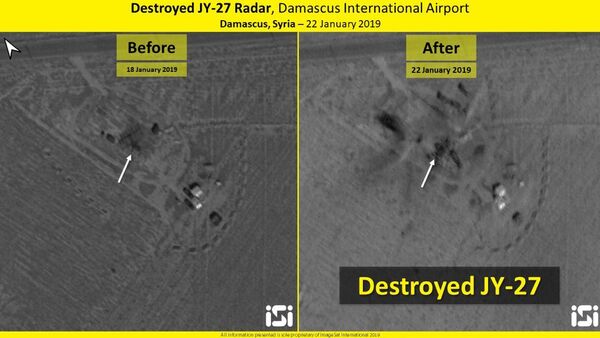 © Photo : ImageSat Intl./twitter
Subscribe
International
India
Africa
Israeli F-35s reportedly carried out strikes on Damascus International Airport in January, targeting an alleged 'Iranian' presence in the area. Air defences intercepted 30 of the missiles, although some still managed to get through and damage airport infrastructure, including storehouses and a Chinese-supplied radar.

The JY-27 'Wide Mat' long-range early warning radar which was reported destroyed during the 20 January Israeli Air Force strike on the Damascus airport has been successfully restored, the Sina news portal has reported, citing fresh satellite photos of the airport and the surrounding area.

According to the portal, media reports about the destruction of the JY-27 were premature, since the strike appeared to have destroyed only the JY-27's antenna, not its transmitter, with Syrian air defence troops able to simply replace the antenna with a spare and turn the system back on. "Otherwise, it would be much more difficult to redeploy the radar," Sina indicated.

The JY-27 Radar at #Damascus Airport in #Syria which was destroyed by the #IAF airstrike January 21st 2019 is apparently about to be operational again. Imageries courtesy of @ImageSatIntl @sentinel_hub @CopernicusEU @googlemaps pic.twitter.com/mraYcqTlZN

Sina suggested that Israel targeted the radar system repeatedly for its "good anti-stealth capability", including its alleged ability to detect IAF F-35s.

Ultimately, the portal indicated that Syria may strengthen defences around the Damascus airport by deploying its newly-received S-300 missile systems in the area, combining these with Syria's existing stock of SA-11 and Pantsir-S1 air defences, creating a relatively large "challenge" for the IAF.

Israeli F-35s Were Reportedly Behind January Raid on Damascus Airport
Israel has conducted hundreds of strikes in Syria, with the latest attack taking place last weekend against an alleged 'Iran-linked' missile factory in Hama province. Tel Aviv has accused Tehran of attempting to establish a foothold in Syria for a possible future military attack against Israel. Iranian officials have insisted that the country's presence in Syria, limited to military advisers, arms and technical assistance, was provided to Syria at Damascus' behest to help the country in its fight against Islamist terrorism.

The frequency of Israeli attacks declined last year after the deployment of Russian-made S-300 air defence batteries in the war-torn country, but has not halted them entirely, with the IAF resorting to launching attacks from Lebanese airspace to hinder an effective defence, and reportedly using new standoff munitions to allow its planes to evade Syrian defences.

Israel launched a series of cruise missiles and guided bomb strikes against alleged 'Iranian' and 'Iranian-linked' sites in Syria on 20 and 21 January after an alleged Iranian rocket was intercepted over the Golan Heights. The strikes, concentrated on the Damascus International Airport, left 11 people dead, including four Syrian troops. According to the Russian military, Syrian air defences managed to intercept over 30 cruise missiles. However, some projectiles made it through, destroying or damaging multiple warehouse buildings, and seeming to destroy the JY-27 radar, and several Pantsir systems. The airport's main building remained untouched.