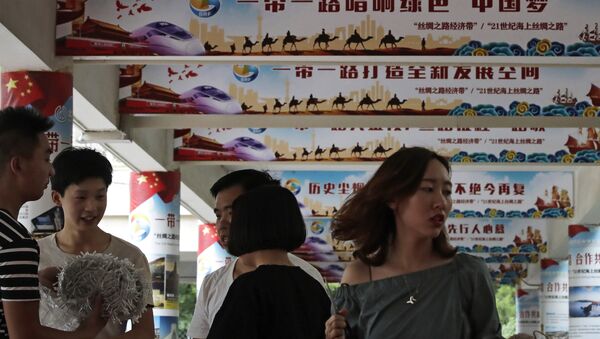 On Wednesday, Chinese Foreign Ministry spokesperson Lu Kang said that Sino-Arab cooperation on the project will be further bolstered during the upcoming second Belt and Road Forum for International Cooperation, which will be attended by representatives of Arab countries.

The agreements were inked during the second China-Arab Forum on Reform and Development, which was held in Shanghai and attended by more than a hundred businessmen and politicians.

He added that the Sino-Arab cooperation on the BRI project will receive another “strong impetus” as many Arab state leaders are expected to attend the second Belt and Road Forum for International Cooperation, scheduled for later this month in Beijing.

This comes against the background of the BRI expanding globally, with Switzerland indicating its intent to sign up for the project earlier this week.

In late March, Rome approved the BRI in a move that makes Italy the first member of the Group of Seven (G7) powerful economies to join the Chinese project.

Shanghai Campaigning for Belt and Road's Investment and Financing Center
Earlier, memoranda of understanding on participation in the project were signed by Luxembourg, Greece and Portugal.

The Belt and Road Initiative, also known as the One Belt, One Road project, was first announced by Chinese President Xi Jinping in 2013 and remains one of Xi’s most ambitious foreign policy and economic plans.

READ MORE: Lack of Funds Will Not Hamper Belt and Road Initiative — Academic

The goal is to strengthen cooperation between Eurasian countries and accelerate economic growth in the region. The project also stipulates promoting investment in projects that would link dozens of countries across Africa, Asia and Europe through the creation of infrastructure networks similar in purpose to the ancient Silk Road trading routes.