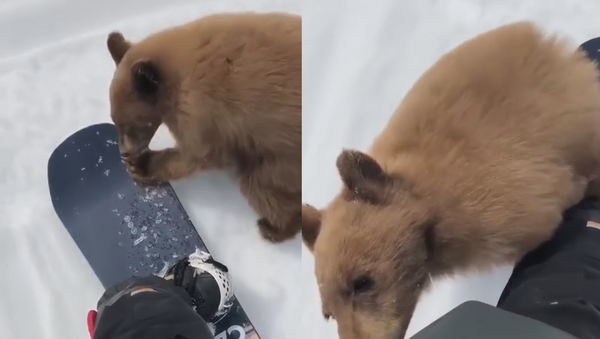 “What do you mean you don’t have any snacks?”

A seemingly sweet sight involving a brown bear yearling and a couple snowboarders has the internet slightly divided after its April 15 posting by YouTube user Halfcabking.

Though neither of the men feed the brown bear, some netizens say that they were less than smart for not shooing the young one off.

"I was a patroller at Northstar for 8 years and we were always chasing these guys off banging poles to scare them and trying to keep them from getting friendly with all the senseless dopes trying to get selfies and feed them power bars. RIP little bear you're doomed," YouTuber Sinister SnowGod asserted shortly after the clip's upload.

Defending the boarder interacting with the bear, Halfcabking responded to a few commenters by putting the blame on the Northstar California Resort for not notifying their guests of proper bear interaction guidelines.