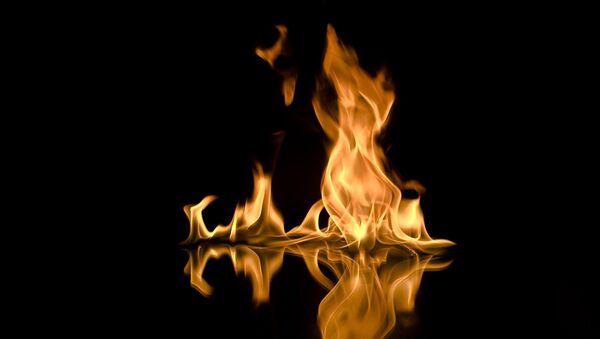 CC0 / /
Subscribe
International
India
Africa
Nineteen-year-old Nusrat Jahan Rafi was reportedly doused with kerosene and set on fire by a mob of girls and boys on the roof of her school located south of the Bangladeshi capital of Dhaka.

New Delhi (Sputnik): A video allegedly featuring a 19-year-old student who was burned to death in Bangladesh last week after reportedly accusing the headmaster of her Islamic school of sexually harassing her has surfaced on local media.

Nusrat Jahan Rafi died on 10 April, five days after a mob of male and female students doused her with kerosene on the roof of her school in the town of Femi, located south of the Bangladesh capital Dhaka, the BBC reports.

Nusrat suffered burns to 80 per cent of her body during the attack after she refused to withdraw her rape accusation against the headmaster of her school.

Nusrat Jahan Rafi who died after being set on fire was laid to eternal rest at her village home in Feni district of #Bangladesh. She was buried at their family graveyard following a namaz-e-janaza at Mohammad Saber Pilot High School ground around 5:50pm. #justicefornusrat pic.twitter.com/Ce123WRutC

Police have since arrested 15 people, seven of whom they believe were directly involved in the attack. At least two male students were among those detained.

In her recorded video confession to the local police, Nusrat said that on 27 March, the headmaster of her Islamic school called her into his office. She identified the headmaster as Siraj-ud-Daula and said he began touching her inappropriately. She said that she managed to flee the school before going to the police station the same day to report the alleged crime.

This resulted in backlash against her and her family, with male pupils from her school organising a rally in support of the headmaster.

Her subsequent death also provoked outrage in the area, with people taking to the streets to demand police arrest those responsible for the tragic incident.

According to reports, in a video recorded after the attack, Rafi said four or five people wearing burqas lured her to the school's roof, threw kerosene on her, and set her alight.

The accused apparently tried to make the incident look like a suicide, a case of self-immolation, but she survived long enough to use her brother's mobile phone to record a video of the attack, reports the Daily Mail.

Prime Minister Sheikh Hasina met Nusrat's family in Dhaka and vowed "none of the culprits will be spared from legal action."

Parents and two brothers of Nusrat Jahan Rafi, a female madrasa student from Feni who has been burned to death over her protest against sexual assault, met Prime Minister #SheikhHasina on Monday. #Bangladesh pic.twitter.com/d9A2BIdt2s

The headmaster, Siraj-ud-Daula, is currently in police custody along with 15 others.

Nusrat's funeral ceremony was held on Thursday in her hometown of Uttar Charsandia. Her father, Musa Manik, said: "We are satisfied with the progress of the investigation, but a speedy trial is a must."