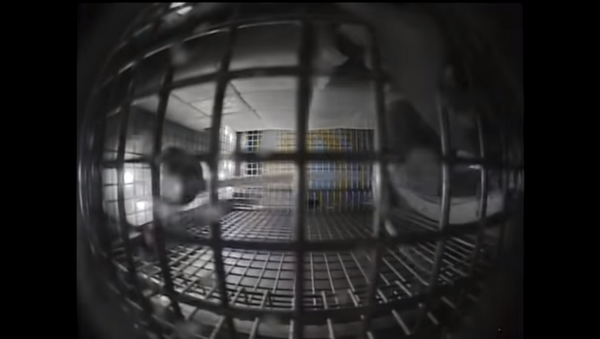 © Screenshot/NASA Video
Subscribe
Wanting to better understand how space affects astronauts, the US' National Aeronautics and Space Administration (NASA) sent a group of mice to the International Space Station for 37 days.

Twitter Terrified After Learning Scientists Creating Mice With Infrared Vision
NASA's findings, which were released last week, show that the chosen rodents engaged in typical mouse behaviors while housed in the three modules that make up the agency's Rodent Research Hardware System. Those typical behaviors included feedings, grooming practices and interactions with other study participants.

And when it came to the group adjusting to the weightlessness factor of their new microgravity environment, scientists noted that they appeared to adapt fairly quickly, using their tails and hindlimbs to center themselves during certain activities.

But what became most interesting to researchers was that a week into the deployment, the group of mice began running laps around the modules, exhibiting a behavior officials later dubbed "race-tracking."

​Although researchers aren't sure why the rodents opted to run laps, they have speculated that the mice were either trying to get in some physical exercise, which could've been rewarding to the group, were reacting to stress or that it "provided stimulation to the body's balance system."

"The researchers think stress is less likely to be the cause — the mice behaved normally otherwise and were in excellent health — but more research is needed to know for sure," reads a release from the space agency.

April Ronca, a researcher at NASA's Ames Research Center in California's Silicon Valley, and lead author of the study, said in a statement that the experiment "shows that the NASA Rodent Hardware System provides the capability to conduct meaningful long-duration biological research studies on the International Space Station."

"Experiments conducted in the habitat can focus on how mouse physiology responds to the spaceflight environment during extended missions and on similarities in response to astronaut crew."

Researchers also noted that when the ISS-stationed mice were compared to their Earth-based counterparts, they weighed the same, and their fur was in "excellent condition," both signs that the ISS group was in great health.

Dozens of similar experiments have been conducted on the station since 2014. This study was published online in the Scientific Reports journal.

gonzo101
17 April 2019, 23:58 GMT
000000
I haven't been able to find the story again on the net, but there is one of a tradtional 'lost on a desert island' affair. The guy is trapped, capable of sustaining himself, but fear washes across him enough that he pushes himself in his daily survival to the extent he acquires injury (quite severe, a broken arm on ones own with no medical assistance). However this moment had pitted his fears against his rational and fortunately his sanity was the stronger entity, thus he survived until he managed to signal rescue some months later. I would presume that this is the same process, to a mouses extent, that these little verminous space rangers are undergoing.