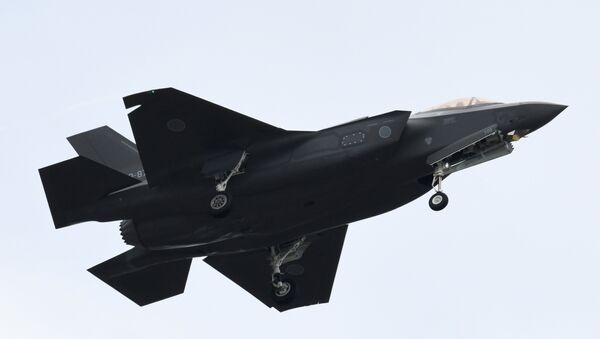 On Wednesday, Japanese Defense Minister Takeshi Iwaya said that Japan’s F-35A Lightning II stealth fighters had made seven precautionary landings before one of the fleet’s fighters disappeared from radars on April 9, 84 miles east of the Misawa Air Base in the country’s northern Aomori prefecture.

A Japanese Air Self-Defense Force (JASDF) spokesperson also confirmed Wednesday that the search for the aircraft and its highly-experienced pilot, Major Akinori Hosomi — who has more than 3,200 hours of flight time — is still underway. US Air Force pilots, for example, currently average around 17.8 hours of flight time a month, amounting to around 213 flight hours a year, military.com reported last year.

The incident took place during a training flight just before 7:30 p.m. on April 9, marking the first time an F-35A has crashed anywhere in the world. According to Takeshi, six of the precautionary landings (which took place between June 2017 and January 2019) were completed by jets manufactured in Japan by Mitsubishi Heavy Industries in Nagoya, Japan. The remaining landing was made by a US-assembled aircraft.

The missing aircraft, which was the first F-35A assembled in Japan, performed two out of the seven precautionary landings. According to the Mainichi newspaper, the missing F-35 had diagnosed issues with its cooling and navigation systems.

Following the crash, US and Japanese search-and-rescue teams were able to find part of the plane's tail about 80 miles offshore from the Misawa Air Base.

Last week, Takeshi announced that Tokyo would ground the JASDF's whole fleet of F-35A stealth fighters. However, on Wednesday, Takeshi also announced that, as of now, the country has not changed its F-35 acquisition plan.

"The cause has not been identified, and there has not been any specific information that is sufficient to change the policy as of now, which means that there is no change in the acquisition plan decided at the end of last year," he said, Stars and Stripes reported.

Takeshi also said Tuesday that "the F-35A is an airplane that contains a significant amount of secrets that need to be protected," Sputnik previously reported.

Akira Kato, a professor of international politics and regional security at Tokyo's JF Oberlin University, told AFP Wednesday that China and Russia likely have "a strong interest in collecting even a single screw of the state-of-the-art plane."

"Even if Japan and the US find it, they may not disclose details, including its exact location, due to concerns that China and Russia might try to collect it," Kato added.

Last August, the nonprofit Project On Government Oversight (POGO) claimed that senior officials developing the F-35 Joint Strike Fighter for the US armed forces are hiding dangerous flaws in the plane instead of fixing them.

According to a document obtained by POGO, F-35 officials have re-categorized major design flaws instead of fixing them in order to claim they had completed the program's development phase.

"Several of these flaws, like the lack of any means for a pilot to confirm a weapon's target data before firing, and damage to the plane caused by the tailhook on the Air Force's variant, have potentially serious implications for safety and combat effectiveness," the report states.

According to a Pentagon assessment released in January, the F-35 program has multiple vulnerabilities that haven't been remedied and improvements "are still not translating into improved availability," Sputnik previously reported.

The F-35B fighter jets, one of three F-35 variants within the program, have issues with its Autonomic Logistics Information System (ALIS), a computerized maintenance tool, which transits "aircraft health and maintenance action information to the appropriate users," according to American aerospace and defense company Lockheed Martin. In addition, the jets have "unacceptable" accuracy problems in weapons systems used in air-to-ground attacks, the report states. Other issues with the F-35B jets include tires that wear out too quickly, refueling probes that break off in mid-flight and life support systems that do not provide adequate oxygen to pilots during flights.