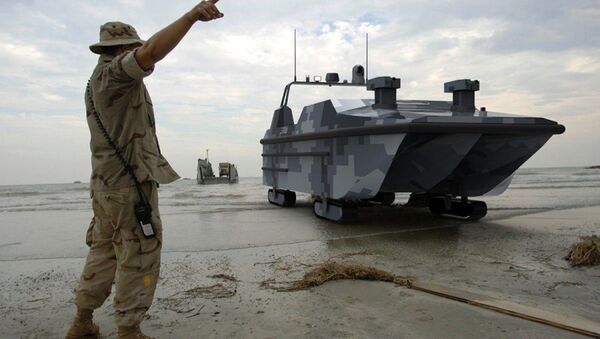 The stealthy vessel, named the 'Marine Lizard', has a maximum range of 1,200 km, a maximum speed of up to 50 knots, and can be controlled remotely via satellites, according to its creators.

Created by the Wuchang Shipbuilding Industry Group, a subsidiary of the China Shipbuilding Industry Corporation, the 12-metre-long vessel, powered by a twin diesel hydro jet, can be used as part of a combat triad working in conjunction with aerial drones and other vessels, and can swarm enemy targets following pre-attack softening by artillery and airstrikes, an unnamed expert speaking to the Global Times said.

Philippines Warns Beijing Against 'Irritant' Acts in S China Sea
Equipped with a modern electro-optical system, radar, and China's domestically created BeiDou satnav system, the 14.7 tonne vessel, featuring an aluminium alloy plate-based hull, is armed with two machine guns and a vertical launch system that can be fitted with both anti-ship and anti-aircraft missiles.

Under the hull are four electric-powered caterpillar tracks, which enable the vessel to accelerate to about 20 km per hour on land, with higher land speeds said to be possible if larger tracks are installed.

According to Global Times' expert, the Marine Lizard's ability to operate autonomously makes it ideal for amphibious assault operations, with the vehicle capable of reconnoitering enemy strongpoints and providing suppressing fire as troops follow from a safe distance to reduce casualties.

Local media noted that in addition to amphibious assault, the vessel is also an ideal option for coastal defence, since it is designed to be able to remain in hibernation mode on an uninhabited island for up to eight months at a time before being activated remotely for patrol or combat operations.

Taiwan to Spend Billions on Bulking Up Island’s Defenses Amid China Tensions
Developers say the drone boat will be made available for export.

A prototype of the Marine Lizard was first unveiled at the 2018 China International Aviation & Aerospace Exhibition.

China has laid claim to large portions of the South China Sea, a strategic waterway rich in fishing and energy resources through which some $3.4 trillion in trade passes each year. Other countries in the region, including Malaysia, Vietnam, Brunei, and the Philippines, as well as Taiwan, have established competing claims over portions of the maritime area.

The US has repeatedly rejected Chinese claims over the territory and carries out regular 'freedom of navigation' missions through the region which Beijing has decried as a violation of Chinese sovereignty. China responded by reclaiming many reefs in the area through dredging operations and the creation of artificial islands. The South China Sea dispute has become a major source of tension between Washington and Beijing.