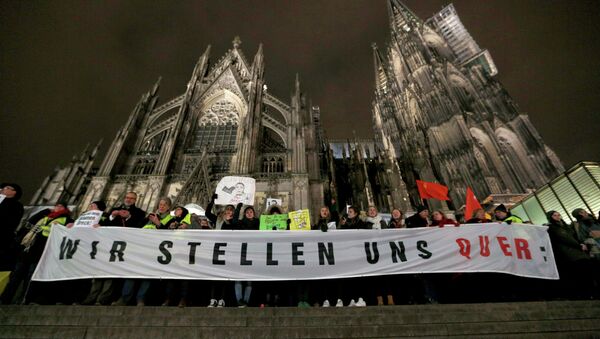 The mix-up was reportedly spotted by many keen-eyed viewers, with one of them joking about how "for us Americans every cathedral looks the same".

As news of the terrible tragedy which befell the famous Notre Dame Cathedral in Paris spread across the world, The New York Times newspaper apparently ended up making a blunder related to the building’s appearance, according to German radio station Deutschlandfunk.

According to the media outlet, the opening sequence of a video released by the newspaper clearly shows the Cologne Cathedral instead of the Notre-Dame de Paris, with many keen-eyed viewers – especially residents of Cologne – quickly noticing the gaffe, with one of them jokingly remarking that "for us Americans every cathedral looks the same".

So. Today on weird coincidences, I saw a video by The NY Times which had the cathedral in Cologne, Germany incorrectly depicted as being Notre Dame. Then I look up as I'm sitting on break and I see this: #Coincidence? #whatdoesthismean pic.twitter.com/BsKv11t3m3

American tears over the Notre Dame: In a New York Times video, they confused the Cologne cathedral with the ND. Aw, those European churches all look alike. https://t.co/rKlfly1wrn via @welt

​On 15 April, a devastating fire erupted at the 856-year-old Notre Dame Cathedral in Paris, inflicting considerable damage upon the famous landmark and causing the collapse of the cathedral's spire and two-thirds of its roof.

The blaze was fully extinguished by Tuesday morning, and French President Emmanuel Macron said that he wants the cathedral to be restored within five years.