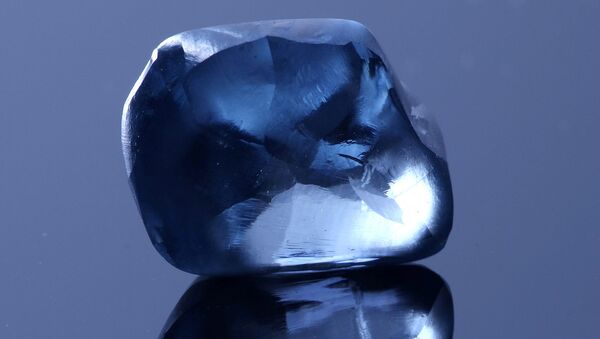 On Wednesday, the Okavango Diamond Company (ODC) showed off its new blue, oval-shaped, 20-carat diamond with almost no imperfections at a launch event in Gaborone, the Botswanan capital.

The southern African country's largest blue diamond to date was mined in Orapa last year through a joint partnership between Anglo American's De Beers diamond company and the Botswanan government.

The diamond is being called "Okavango Blue" — named after Botswana's Okavango Delta, which has been classified as a UNESCO World Heritage Site for its nature and wildlife.

The Okavango Blue has not yet had its market value estimated.

According to data collected through the Kimberley Process Certification Scheme (KPCS), established in 2003 to curb the flow of conflict diamonds, Botswana is one of the top producers of the most highly valued diamonds globally — just behind the Russian Federation.

ODC Managing Director Marcus ter Haar recently told ABC News, "From the first moment we saw the diamond, it was clear we had something very special. Everyone who has viewed the 20-carat polished diamond has marveled at its unique coloration, which many see as unlike any blue stone they have seen before. It is incredibly unusual for a stone of this color and nature to have come from Botswana — a once-in-lifetime find, which is about as rare as a star in the Milky Way."

Ter Haar also confirmed that the diamond is not available for purchase just yet. The company plans to showcase the diamond to promote Botswana "as a leading global producer of natural, ethical diamonds, with an anticipated sale toward the end of the year," he added.

Massive Emerald Weighing Over 600 Pounds Found by Miners in Brazil

The Okavango Blue, though smaller in size than the historic Hope Diamond, outranks it in purity, Ter Haar told Bloomberg.

Blue diamonds, considered extremely rare and valuable, get their color from boron, an element found in the earth's crust, according to Sotheby's — an international firm that routinely auctions precious materials including art and jewelry.

Last year, the Farnese Blue, a blue diamond that had been passed through generations of royal families in Europe, fetched $6.7 million at an auction. In 2016, the Oppenheimer Blue, valued at around $45 million, ended up selling for $57.5 million at Christie's auction house.