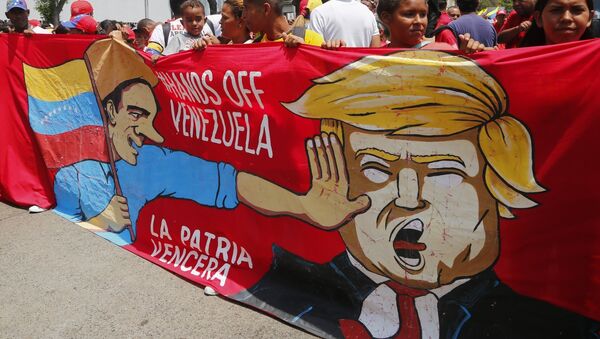 Despite all the efforts of the US and its allies, the Venezuelan government has continued to survive internal and international pressure. Speaking to Sputnik, analysts specialising in Venezuelan affairs have shared their views on the current developments and explain why the US has so far failed to coerce Caracas into submission.

The Venezuelan economy has been facing an acute crisis since the beginning of the decade; its economy has contracted, its GDP has fallen steadily and more than 3 million people having left the country. The US and its Western allies blame Maduro's governments and that of his predecessor, Hugo Chavez. However, analysts say that the mainstream media narrative is completely detached from reality.

"The mainstream narrative is demonstrably false. Here we have to do with an economic war dating back to 1999 and with draconian measures to asphyxiate the Venezuelan economy since 2015," Alfred de Zayas, an American lawyer, writer, historian, and former UN rapporteur to Venezuela, told Sputnik.

Not So Almighty: Why It's Not Up to US to Decide Who Will Act for Caracas at UN
However, Zayas does not try to gloss over Caracas' mistakes: "Perhaps the worst mistake Chavez and Maduro made was not to diversify the economy in the years 1999-2014, before the price of crude oil collapsed.  A country that depends 95% on oil exports is hugely vulnerable to the volatility of the market," he explained, adding that Washington had taken "Machiavellian advantage of the Venezuelan vulnerability".

Ricardo Vaz, a writer and editor at Venezuelanalysis.com, echoed the lawyer by stressing that the US' unilaterally imposed sanctions had had "a devastating effect on Venezuela's economy, with the expressed purpose of causing as much suffering as possible so as to provoke a coup, or force the government to resign".

"It hearkens back to Nixon's famous quote of 'making the economy scream,' at the time in reference to Chile," Vaz recalled.

The writer highlighted that contrary to the MSM narrative, "Venezuela actually enjoyed the most prosperous time in its history during the 10 years" before the crisis erupted in 2013-2014.

Commenting on the issue, Alina Duarte, a journalist at TeleSUR, elaborated that the Western MSM had waged an extensive information war against the country.

"Saying that there is a humanitarian crisis in Venezuela is just one of the last episodes of the hegemonic narratives against the government of Venezuela that began in December 1998 when Hugo Chavez took power," she said, adding that political, economic and media attacks have been going on for the last two decades.

Stalled Coup: US' Allies May Soon Regret They Rushed to Embrace Guaido – Journo
According to the journalist, "the US blockade against Venezuela can only be compared to the one imposed against Cuba since 1960." Duarte pointed out that according to Caracas' February estimates, "direct losses to the nation's economy were 38 billion dollars, 15 billion related to the siege against the company Citgo, a subsidiary of the state oil company Venezuelan Petroleum in the US". Additionally, the Bank of England has frozen 1.2 billion dollars in Venezuelan gold reserves.

In early April, the Trump administration stepped up sanctions against the country, this time targeting oil shipments between Venezuela and Cuba. On 15 April, the US Treasury Department blacklisted four more shipowners and nine tankers involved in Venezuelan oil trade with Cuba.

Guaido's Economic Programme Has All the Hallmarks of Neoliberalism

Meanwhile, the MSM is intensively covering Juan Guaido, the head of the dis-empowered National Assembly, who proclaimed himself interim president of Venezuela on 23 January 2019. Very little is known about his political programme which prompts questions as to whether he is competent and what reforms he would have carried out if he had come to power.

According to Vaz, "Guaido's intentions and political plan are actually quite clear".

"A 'country plan' ('Plan País') has been published and presented on different occasions, with all the hallmarks of neoliberalism one can think of", the writer explained. "There are plans to open up state sectors to private capital, particularly the oil industry, remove regulations, tax reform, and expectations of a hefty loan from the likes of the IMF, with all that it entails."

Venezuela Blackout Caused by Low Turbine Speed as Result of Cyberattack - Source
For his part, Zayas highlighted that "Guaido is an industrial engineer, not an economist nor a lawyer".

"Basically he is an unknown who has been manufactured by the United States, and, of course, he follows instructions," the lawyer suggested. "Guaido would usher in massive retrogression in economic, social and cultural rights and return the country to the good old days 'when the rich were rich and the poor were poor'."

Referring to Guaido's presidential bid, the former UN rapporteur to Venezuela underscored that the Venezuelan Constitution "does not recognise the competence of the National Assembly to nominate the interim president".

"Should Maduro die or become incompetent, it is the Vice-President, Delcy Rodriguez, who would be the constitutional successor", he explained. "Article 233, which Guaido invokes, simply does not apply to his case.  But, of course, he is not a constitutional lawyer." 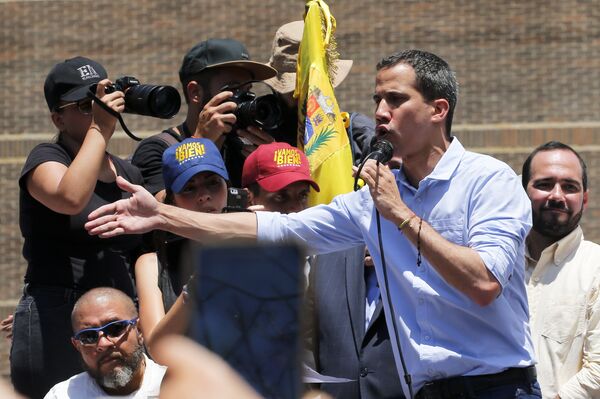 Opposition leader and self-proclaimed interim president Juan Guaido speaks to supporters during a rally to protest outages that left most of the country scrambling for days in the dark in Caracas, Venezuela, Saturday, April 6, 2019
© AP Photo / Fernando Llano

Guaido's Support Has Been Dwindling

Guaido has failed to command nation-wide support so far, Vaz noted. According to the journalist, "the success of the coup hinged on two variables: Guaido's ability to generate massive support beyond the opposition's traditional middle and upper class base, and a rupture in the Venezuelan armed forces."

"[However] neither has happened", he emphasised. "Guaido's support has also been dwindling, with enthusiasm in his ranks withering away."

According to the analysts, Guaido's major supporters are the US and its allies, as well as Venezuelan oligarchs inside and outside the country.

Duarte drew attention to the fact that what the US was trying to do in Venezuela does not differ much from what it had done "in Libya, Iraq, Honduras, even in Venezuela in 2002 but they failed".

"What we need is to understand that the Venezuelan problems need to be solved by the Venezuelan people and that if the international community want to stand for the people in Venezuela they need to make a call to the US to stop the sanctions that are deepening the crisis instead of solving it," she stressed.

There is Nothing More Undemocratic Than Coup D'etat

"The situation on the streets of Venezuela, in contrast to the frenzied picture broadcast by the media, has been one of relative calm," he said. "This is not a country at war or anything like it. However, it is undeniable that there is a severe economic crisis going on, which has hit people very hard, especially the poorest sectors of society. Everyday problems such as accessing food have now been compounded by an electricity crisis."

Russia Helps Venezuela in Probe Into Attacks on Power Grid – Deputy FM
He reiterated that "it [was] not the case that what we have is a humanitarian crisis".

"Experts have warned against the misuse of this term, which the US and the Venezuelan opposition employ to justify or provide cover for a foreign intervention," the writer stressed.

Commenting on this, Luis Almagro, Secretary General of the Organisation of American States (OAS) remarked that one of the ways to solve the Venezuelan conflict is the "re-democratisation of the country"; the analysts opined that he missed the point.

"The Venezuelan crisis is artificial," Zayas stressed. "It can be solved by lifting the sanctions, ending the economic war and the financial blockade, and by stopping the manipulation of the currency, resulting in induced inflation…  Luis Almagro has been acting in a highly unprofessional manner, contrary to the OAS Charter and thereby undermining the credibility and authority of the Organisation."

US Knows It Must Do 'Something Quite Dramatic' to Overthrow Maduro - Analyst
According to the lawyer, "there is nothing more undemocratic than a coup d'etat, and Almagro's shenanigans contravene many articles of the OAS Charter, particularly 3, 19 and 20."

"Amazing how language has been corrupted — to speak of 're-democratising' Venezuela is surrealistic," he added.

Vaz shares a similar stance: "the Venezuelan crisis can certainly be solved without overthrowing the Maduro government", he underscored.

"[However], the Venezuelan opposition, the US and its allies are instead determined to ensure that the crisis is not solved as long as Maduro is in power. In fact, the two issues are not separate, since, for example, the deliberate worsening of the crisis due to sanctions has the goal of removing the government," the writer said.