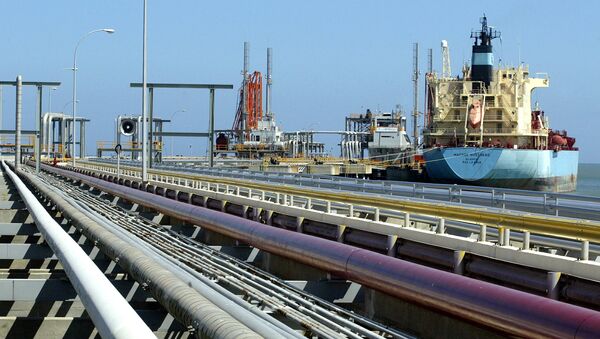 Author Dan Kovalik joined Radio Sputnik’s By Any Means Necessary Monday to discuss the history of US-Venezuelan relations and US efforts to take over Venezuelan oil production.

"The US' long term support for dictators in Venezuela in order to gain control of Venezuela's oils for US companies [is nothing new]," Kovalik, whose upcoming book is titled "The Plot to Overthrow Venezuela: How the US Is Orchestrating a Coup for Oil," told hosts Sean Blackmon and Bob Schlehuber.

​"This was a policy that dates back to the early part of the 20th century, and really what's happening now is that they want that oil back. When [Hugo] Chavez became president [of Venezuela], when he was elected in 1998, he began to use Venezuela's oil for the Venezuelan people, which is quite the anathema to the United States. And then he began to nationalize the oil and kick out some big oil companies like ExxonMobil; those companies [now] want that oil back. It's very clear that that's what happening. In fact, John Bolton, the [US] national security adviser, has already been meeting with US companies to talk about which companies are going to get which interests in Venezuelan oil," Kovalik explained.

According to Kovalik, the US has a history of working with small groups of wealthy elites in Venezuela who protect the US' interests, which has resulted in great poverty in Venezuela.

"In 1989, after the newly elected president of Venezuela [Carlos Andrés Pérez] instituted International Monetary Fund [IMF] austerity measures after promising not to do that, there was a huge uprising in Venezuela, and hundreds, if not thousands, of people, were killed in what was called the Caracazo, and this was an earth-shattering event in Venezuela. After that massacre of people protesting, this is what led to rise of Hugo Chavez, who ended up becoming president through the support of the poor who rejected the IMF austerity measures imposed on Venezuela. Chavez rejected those measures, [Venezuelan President Nicolas] Maduro has continued to reject them — that's another reason why the US wants Maduro out," Kovalik explained.

February 27, 1989, protests that took place in Caracas and other cities across Venezuela were triggered by an IMF "structural adjustment package" agreed on by Perez' administration, which was to increase transport, fuel and utility prices and remove the price caps on certain goods in the country. In response to the mass protests, Perez declared a state of emergency and sent the Venezuelan army into the streets to kill hundreds or thousands of people. The uprising eventually paved the way for the election Chavez as president in 1998.

"The US engaged in numerous types of ways to overthrow [Chavez]. In 2002, the US helped orchestrate that coup," Kovalik explained, referring to a failed coup d'état on April 11, 2002, in which Chavez was ousted from office for 47 hours and flown to an offshore military base while Pedro Carmona, the president of the Venezuelan Federation of Chambers of Commerce and Production, or Fedecámaras, became interim president. However, millions of Chavez's supporters protested his detention, and he returned to office 48 hours later. It was later revealed that the US had ties to participants in the coup.

"In 2015, Obama's declaration — actually twice he declared that Venezuela represented a serious national security threat, and he did that in order to start imposing sanctions upon Venezuela. I believe the timing was based on the death of Hugo Chavez [in 2013]. They felt that Maduro did not have the type of support that Chavez had. [US President] Donald Trump, in August 2017, imposed sanctions which cut Venezuela off from all international financing, so Venezuela couldn't refinance its debt. This was a real blow to the Venezuelan economy. Those sanctions continued to be increased, with Trump announcing that the US would seize all of Venezuela's oil profits that are in the US, around 7 billion dollars' worth," Kovalik told Sputnik.

In August 2017, Trump signed an executive order imposing new financial sanctions against the Venezuelan government in order to put financial pressure on the government of Maduro, according to an official statement.

"These include provisions allowing for a 30-day wind-down period; financing for most commercial trade, including the export and import of petroleum; transactions only involving Citgo; dealings in select existing Venezuelan debts; and the financing for humanitarian goods to Venezuela," the statement explained, Sputnik previously reported.

The United States has imposed numerous rounds of sanctions against Venezuela in response to the political developments in the country. On January 23, opposition leader Juan Guaido proclaimed himself Venezuela's interim president, denouncing Maduro's government as undemocratic and calling for Maduro's ouster.

On January 28, the United States announced the imposition of sanctions on Venezuela's state-owned oil and natural gas company PDVSA, blocking the company's $7 billion in assets that remained under US jurisdiction. The move is expected to result in $11 billion in lost revenue from the US market. In addition, the Trump administration blocked US companies from conducting financial transactions with PDVSA.

"We're really in a period where there is great danger of a possible war with Venezuela," Kovalik said, also noting that the American people have been fooled into thinking that the US' support of Guaido is about democracy in Venezuela and not oil.

"It is an amazing feat in propaganda, especially because you have quite a tyrannical leader in Donald Trump. Many liberals are in this so-called resistance against Trump. Many of them are on board with Trump's policies in Venezuela. They don't support him with anything else," Kovalik told Sputnik.