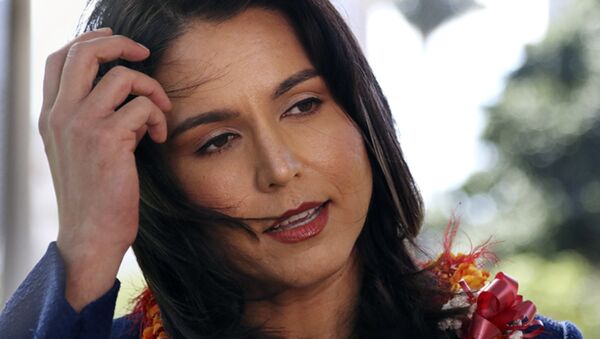 The use of two different memes from two different franchises did not sit well with a considerable number of netizens who were quick to let the congresswoman know what they think about her “meme game”.

US congresswoman and 2020 presidential candidate Tulsi Gabbard landed in hot water after she apparently attempted to impress her social media audience with her knowledge of memes.

Complaining about her flight from LAX to Chicago being delayed due to weather conditions, Gabbard used the words “Winter is Coming”, a memetic phrase featured in both HBO’s “Game of Thrones” series and George R. R. Martin’s “A Song of Ice and Fire” saga the show is based on.

My flight delayed from LAX for hours because Chicago is covered in snow. Winter is coming. In April. Are you ready? #GameofThrones pic.twitter.com/EYPl7SBY18

​However, she also accompanied her post with a depiction of a different meme which originates from the Lord of the Rings movie trilogy, and a number of netizens did not seem amused by this mismatch.

One does not simply mash up J.R.R. Tolkien and George R.R. Martin references. =:^)

You are mixing up LOTR and GoT memes. I recommend sticking to dismantling the military industrial complex

Nice picture of Ned Boromir who died in episode one of Lord of the Thrones.

I know Sean Bean dies in everything, but you’re mixing your metaphors here and it’s weird. It does not snow in Mordor.

​And whether Tulsi wanted to deliberately experiment with mixing memes or not, not everyone was impressed with her “meme game”.

oh no tulsi
please no
you cant 'how do you do, fellow kids?' us
i trusted you

Tulsi you need to modernize your meme game, and the US healthcare system.