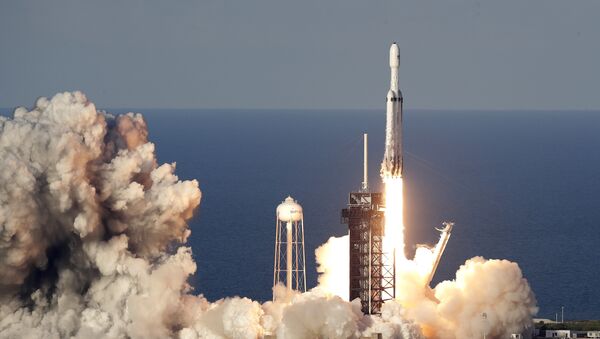 After the successful landing of all three first stages of its Falcon Heavy megarocket last Thursday (April 11) during the huge launcher's first commercial mission, Elon Musk's company met with misfortune in the rough seas.

Two of the boosters, landed off the Florida coast, successfully made their way back home. However, another one – the central core — touched down on a "drone ship" in the Atlantic Ocean, Space.com reported. The ship was caught in a storm and couldn’t make its way back.

"Over the weekend, due to rough sea conditions, SpaceX's recovery team was unable to secure the center core booster for its return trip to Port Canaveral," SpaceX representatives said in an emailed statement. "As conditions worsened with 8- to 10-foot swells, the booster began to shift and ultimately was unable to remain upright. While we had hoped to bring the booster back intact, the safety of our team always takes precedence. We do not expect future missions to be impacted."

Science & Tech
SpaceX's Starhopper Fires Up Rocket Engine For The First Time (VIDEO)
The Falcon Heavy's three first-stage boosters are modified versions of Falcon 9 first stages. As The Verge noted, the Heavy's central core has a slightly different design than the Falcon 9 first stage, because the former must link up with two side boosters.

The company also recovered both halves of the Heavy's payload fairing during Thursday's mission, securing hardware that costs $6 million. SpaceX plans to reuse the fairing and the two side boosters that touched down after the launch.

Thursday's launch, which successfully lofted the Arabsat-6A communications satellite, was the second ever for the Falcon Heavy, the most powerful rocket operating today. During its first flight, a test mission in February 2018, the Heavy sent Musk's Tesla Roadster into orbit around the sun.