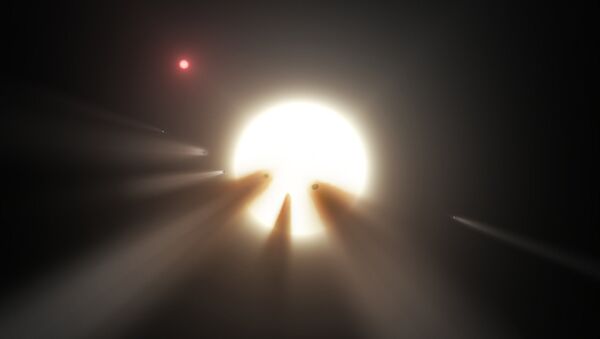 © NASA . JPL-Caltech
Subscribe
International
India
Africa
A small piece of a 3.5 million-year-old comet found stacked inside a meteorite is thought to contain secrets of how our Solar System was built.

The meteorite itself was found in the LaPaz icefield in Antarctica, and had a chunk of comet preserved inside, which allowed it to be safely contained within the rock and prevented it from burning out in the Earth’s atmosphere.

“It gave us a peek at material that would not have survived to reach our planet’s surface on its own, helping us to understand the early solar system's chemistry,” Carnegie Institution for Science's Larry Nittler said.

The meteorite was named ‘LaPaz Icefield 02342’ and belongs to “a class of primitive carbonaceous chondrite meteorites that have undergone minimal changes” since its formation 4.5 billion years ago outside Jupiter’s orbit, scientists revealed.

Previously discovered meteorites of the same type as LaPaz contain organic compounds like water and amino acids and nucleobases – the basic components of protein and DNA –  allowing scientists insight into the development of the early solar system.

Russia
WATCH Meteorite Soars Over Siberian City
Researchers have suggested that particles migrated from the outer edges of the solar system to a closer area beyond Jupiter where the carbonaceous chondrites took shape as planets began to form.

“When I saw the first electron images of the carbon-rich material [inside the meteorite], I knew we were looking at something very rare. It was one of those exciting moments you live for as a scientist,” said Jemma Davidson of Arizona State University's Center for Meteorite Studies.

Both comets and asteroids are formed from the gas and dust that used to surround the sun. However, they are forming in different parts of space thus containing different compositions: Comets tend to form farther from the sun and contain more carbon and water ice. The researchers conducted chemical and isotopic analysis of the material and suggested that the LaPaz comet had likely come from the icy outer solar system along with objects from the Kuiper Belt, where many comets originate.