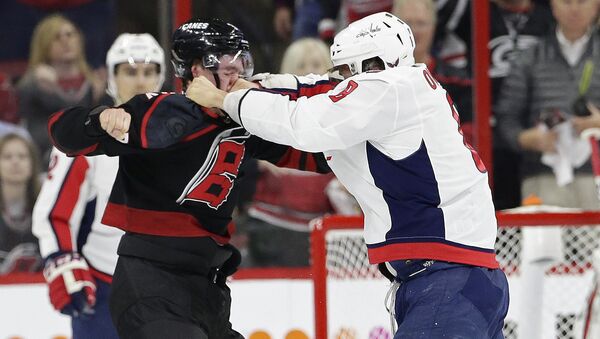 Andrei Svechnikov, a 19-year-old forward for the Carolina Hurricanes, learned a hard lesson this week when he faced off against Washington Capitals star Alex Ovechkin in the barn.

Just 11 minutes into Monday night's first-round playoff game, the pair exchanged multiple blows until Ovechkin came in with the closer, knocking the teenager hard onto the ice.

Footage of the brawl shows Svechnikov's head hit the ice hard. The rookie player remained sprawled out for a spell before being escorted off by his team's trainers. He did not return to the game.
As for Ovechkin, the 33-year-old Moscow native wound up in the sin-bin with a five-minute major penalty.

​Despite the brawl, the Hurricanes still managed to win the game with a 5-0 score. However, Washington is still leading the series 2-1.

After the game, Ovechkin told reporters that he doesn't consider himself a "big fighter" and that he hopes Svechnikov is "OK."

"He asked me to fight and said, ‘Let's go,'" Ovechkin recalled. "I hope he's OK. You don't want to see a guy get hurt or something."

"We got maybe a little bit frustrated and too confident. We just have to forget about it and move forward," he added.

​This incident marked Ovechkin's first brawl since December 12, 2010, when he threw down against Rangers forward Brandon Dubinsky. That brawl was called to an end by referees when the duo tumbled to the ice.

Monday's game also marked the first time that Svechnikov got into a boxing match on the ice, according to Hurricanes coach Rod Brind'Amour. "It's his first fight. He's played 90 games, he's never fought in his life, and I'm pretty sure Ovi knew that," he said.

In the Twittersphere, folks appear to be pretty torn up about the fight.

​NHL.com reported that Svechnikov isn't expected to appear in the series' next game, which is scheduled for Thursday. Brind'Amour told the outlet that Svechnikov has undergone concussion protocols, and that he seems to be doing a lot better.