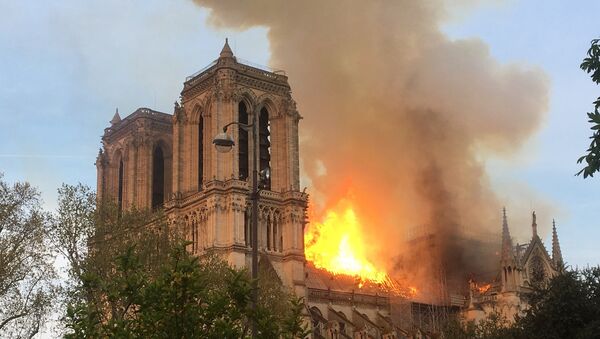 © Sputnik
Subscribe
International
India
Africa
PARIS (Sputnik) - The fire at Paris' Notre Dame Cathedral has been put out completely, Gabriel Plus, the spokesman for the Paris Fire Department, said Tuesday.

"All the fire has been extinguished. The expertise is now underway," the official said, as aired by the BFMTV broadcaster.

At least two policemen and one firefighter have sustained minor injuries in the devastating fire that hit the landmark Notre Dame Cathedral in Paris, the city's fire brigade added Tuesday.

A massive fire broke out at Notre Dame in Paris on Monday, causing the collapse of the cathedral's spire and the destruction of its roof.

The fire reportedly began at around 6:50 pm local time, according to the Paris fire department. AFP reported that the fire may have been started accidentally during renovation work underway inside the cathedral.

Speaking from the scene, French President Emmanuel Macron described the incident as a "terrible tragedy" and promised to rebuild the cathedral.