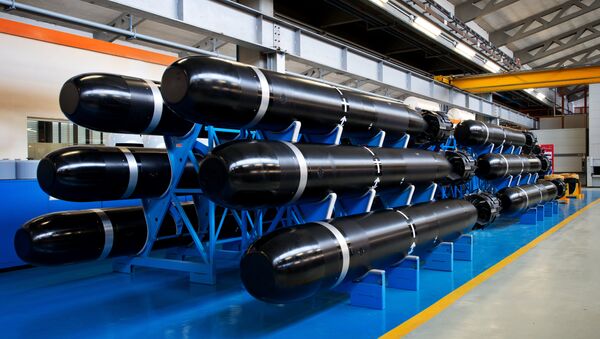 Several naval forces are testing the idea of anti-torpedo torpedoes, self-propelled weapons with explosive warheads that are used to detonate enemy torpedoes. The technology could change undersea warfare by seriously weakening the threat of enemy submarines.

The German Navy, for instance, has experimented with what is dubbed the SeaSpider interceptor torpedo, manufactured by the ThyssenKrupp Marine Systems subsidiary Atlas Elektronik. Anti-torpedoes are fired from sponsons (projections on the sides of ships that are mounting points for weapons) fitted on a ship's hull, and are able to detonate torpedoes, cigar-shaped underwater missiles that can be fired from ships or submarines, before they strike the ship.

In a statement released earlier this month, the German Bundeswehr Technical Center for Ships and Naval Weapons, Maritime Technology and Research announced that it completed sea trials of the SeaSpider in the Baltic Sea in 2018, Naval Today reported.

The Russian Navy is also arming its vessels with the Paket-E/NK anti-submarine/anti-torpedo system. According to its manufacturer, JSC Tactical Missiles Corporation, the technology can be used to "destroy torpedoes," as well as to battle enemy submarines.

"Depending on missions assigned to the surface ship, its launching units can house combat modules armed with different combinations of small-sized heat-seeking torpedoes and/or anti-torpedoes," the manufacturer explains.

Meanwhile, Turkey's leading defense systems producer, ASELSAN, revealed its TORK Hard-Kill Torpedo Countermeasure System back in 2015. According to a report by Navy Recognition, TORK counters torpedo threats by measuring their distance and direction from ships and then deactivating them through detonation.

In September 2018, the US Navy suspended its Anti-Torpedo Torpedo Defense System (ATTDS), according to a report released by the Pentagon's Office of the Director of Test and Evaluation (DOT&E) in February 2019.

The ATTDS consists of the Torpedo Warning System (TWS) and Countermeasure Anti-Torpedo system (CAT). The TWS includes a towed sensor that trails ships in order to detect any incoming threats. In the event that it detects a projectile, it will classify it and provide targeting information for CAT, which will in turn use its "hard-kill" interceptor to neutralize the threat, Sputnik previously reported.

According to DOT&E, even after spending more than $760 million on the project, improvements were few and far between, and the system's ability to destroy incoming threats wasn't accurate enough to be fully tested.

"Test data were insufficient to assess operational effectiveness and operational suitability of TWS and CAT," the report states. "TWS demonstrated some capability to detect incoming torpedoes. The significance and effect of false target alerts on TWS capability are unknown."