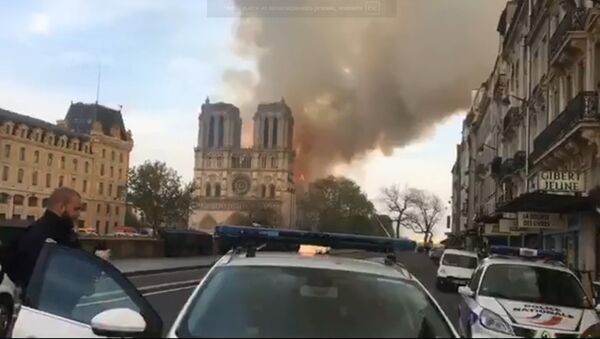 MOSCOW (Sputnik) - The French presidential majority campaign for the upcoming European elections is suspended after a devastating fire in the iconic Notre Dame cathedral in the centre of Paris, a candidate on the electoral list Renaissance said Tuesday.

"We are experiencing a moment of profound sadness. List Renaissance is naturally joining this moment of national unity. We are suspending the campaign until further notice," Nathalie Loiseau, a candidate on the electoral list Renaissance said on Twitter.

French Prosecution: No Evidence of Arson in Notre Dame Cathedral Blaze
The remark comes after Monday's fire left the cathedral heavily damaged. French President Emmanuel Macron has described the incident as a "terrible tragedy" and promised to rebuild the 850-year-old cathedral.

The French heritage foundation has launched a fundraising campaign, while a number of foreign officials have offered condolences and support to France. People in Moscow and Washington have brought flowers to the French embassies in their respective cities.

The European elections will take place on 23-26 May.