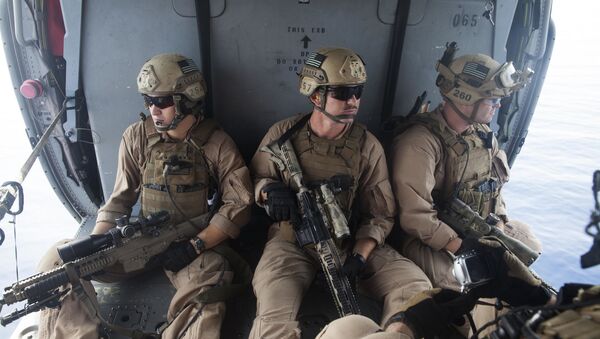 According to the Iranian Mehr news agency, 204 out of the 256 Iranian parliament members present voted in favour of the bill.

The Iranian parliament ratified a bill on Tuesday which designates the US Central Command (CENTCOM) as a terrorist organisation in retaliation to the United States placing Iran's Islamic Revolutionary Guard Corps (IRGC) under the same designation last week, local media reported.

The bill also considers any aid — financial, technological and information — provided to CENTCOM a terrorist measure.

Protesters March in Tehran Against US Decision to Blacklist IRGC (VIDEO)
This comes after on Monday a notice in the US Federal Register confirmed that the US formally designated Iran's Islamic Revolutionary Guard Corps (IRGC) as a foreign terrorist organisation. Prior to that, on 8 April, US President Donald Trump announced that the United States was including Iran's IRGC on its terror list. In response, the Iranian Foreign Ministry proposed that the country's Supreme National Security Council include CENTCOM in its list of terrorist groups.

Tensions between the United States and Iran have escalated since Washington withdrew from the Iran nuclear agreement last year and reinstated sanctions against Tehran. The nuclear agreement envisaged gradual lifting of sanctions in return for Iran keeping its nuclear program peaceful.