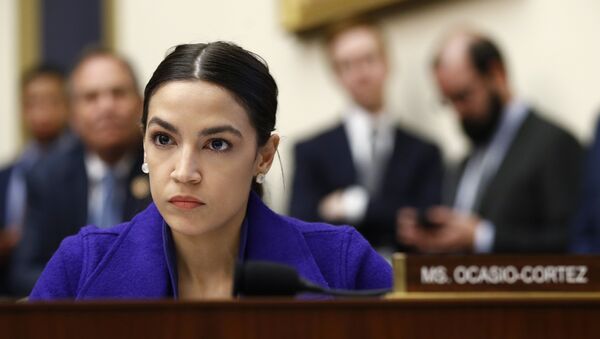 Washington and Tel Aviv signed a $38 billion agreement on US military assistance to Israel in 2016, with the US committing itself to spending $3.8 billion a year to "bolster Israel's capacity to defend itself against threats in the region and maintain its qualitative military edge."

Freshman Democratic Congresswoman Alexandria Ocasio-Cortez has raised eyebrows among Republicans and supporters of Israel after hinting that the US should contemplate reevaluating its aid policy to the Middle Eastern country.

"I think it's certainly on the table," the New York congresswoman said, when asked by Yahoo News if she would support a possible cut in US military or economic aid to Tel Aviv.

Rep. @AOC thinks "Netanyahu is a Trump-like figure" and says the reelection of the Israeli prime minister is part of “the ascent of authoritarianism across the world" https://t.co/YerdSu30jF via @isikoff, @dklaidman, @skullduggerypod pic.twitter.com/TrpjYRQHUX

Pompeo Says Netanyahu's Vow to Annex West Bank Will Not Harm Mideast Peace Plan
AOC also attacked recently-elected Israeli Prime Minister Benjamin Netanyahu, calling him a "Trump-like figure" and saying there were "so many ways to approach [the] issue" of Netanyahu's recent promise to annex Jewish settlements in the West Bank.

The congresswoman's remarks did not escape the attention of her many detractors, who pounced on her "ignorance," and gave her a lesson on why US aid to Israel was "an investment in America's own security."

Her ignorance is beyond comprehension. The perfect example of a generation that has gained the minimal wisdom they possess from a six inch screen and the blurbs that flash across it! She knows nothing about Netanyahu and Less about Israel! pic.twitter.com/wbM4Ri0vBt

1️⃣ US aid to #Israel is *not* charity

Cortez should spend a week in Shderot. She will experience the violent nature of Gaza Arabs and understand why Prime Minister of Israel needs to be strong. The Arabs are not the underdogs. Israelis are the underdogs.

AOC's defenders went the other way, agreeing with the idea that US taxpayers should stop forking over $3.8 billion a year to "wealthy Israel." Supporters of the so-called 'Boycott, Divestment Sanctions' (BDS) movement also chimed in with their support, warning the congresswoman that she might face political attacks and charges of anti-Semitism over her stance.

Yes, @AOC, it is long past time to stop sending weapons to Israel which it is using to deny the rights of Palestinians. We give them nearly $4 billion a year. This map shows what we could be doing with the money instead:https://t.co/3HPYPsSppL

Thank you ⁦@AOC⁩. This needs to said & done. Our massive aid to Israel makes us complicit in their human rights violations in the occupied Palestinian lands. It’s an old story, but at last we have voices courageous enough to speak the truth. https://t.co/zFdR5DWJzr

Well done @AOC but the @AIPAC knives will be out for you now.
Might want to give this guy a call, he knows what it's like to criticise Israel and get attacked pic.twitter.com/h7MVoMEyKx

Others argued that Ocasio-Cortez actually had a "nuanced position" on the issue comparable to that of past US presidents, including Republican ones.

Nuanced position from @AOC in wake of Netanyahu annexation pledge: open up discussion of US-Israel relations. J Street view: US can assure Israeli security w/o funding activities that run counter to US values, interests such as annexation, demolitions. https://t.co/TiaKIutdvT

Remember when George HW Bush's delayed loan guarantees to Israel over settlements? And when Reagan condemned Israel for Golan annexation? Repubs will hit @AOC for saying aid to Israel should be "on the table," forgetting times when they had courage, too. https://t.co/hbdB588jOB

Former President Barack Obama signed onto a ten-year Memorandum of Understanding with Israel on security assistance for the years 2019-2028 in 2016, committing the US to providing $3.8 billion in aid to the country each year. That's up from the $3 billion committed under the previous agreement.

Late last year, President Trump said he was not concerned about Israel's security in the wake of the upcoming US Syria withdrawal, saying the US provided Israel with "a lot more" than $4.5 billion in assistance a year, allowing them to do "a very good job for themselves." The president did not clarify where he got the $4.5 billion figure.