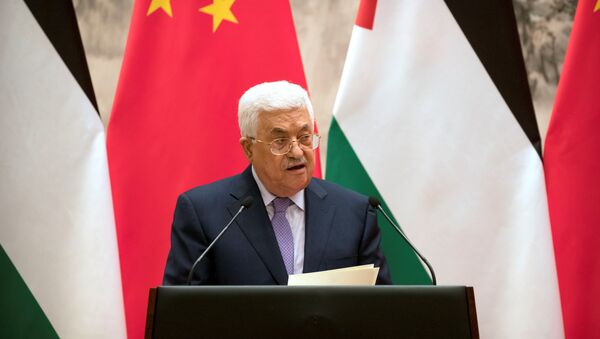 “We are talking to our brothers, our friends to see how to collectively react to this. If Netanyahu wants to annex the West Bank, he has to deal with 4.5 million of Palestinian. We will have a different fight … If the two-state solution is being eliminated and he is going to annex the West Bank, then the response should not be exclusively Palestinian, but the response should be collective response from the international community,” Maliki said.

The minister noted, however, that remarks made by Israeli PM Benjamin Netanyahu about the annexation of the West Bank should be seen in the context of his attempts to win more votes in the last week’s elections and looming indictment for corruption and bribery.

The comment was made in responce to Netanyahu's statement made 6 April, in which he pledged to annex settlements in the West Bank if he secured next term at the parliamentary elections.

Netanyahu's Likud party won 36 of the 120 seats in Israel's parliament, according to results of the elections, which took place last Tuesday.

In an interview with Sputnik Mr Maliki also said that Palestinian leader Mahmoud Abbas is ready to meet with Israeli Prime Minister Benjamin Netanyahu without any preconditions if a meeting is hosted by Moscow.

“We have reiterated our readiness and our willingness to [Russian] President [Vladimir] Putin that any time that he believes there is readiness on the Israeli side we will be more than ready to come and sit and have talks with Netanyahu in the presence of President Putin … We are ready to talk with Israelis without any conditions … as long as the invitation comes from President Putin, as long as President Putin is the host, the one who will create the best conditions for a meeting to take place and for a meeting to be successful,” Maliki said.

The minister noted, however, that there were no specific proposals on such a meeting at the moment, adding that Israel did not seem to have talks with Abbas on his agenda among his efforts to form a coalition after the election last week.

The foreign minister also expressed his gratitude for Moscow’s efforts aimed at the Israeli-Palestinian settlement.

Russia has repeatedly expressed its readiness to arrange talks between the Israeli and Palestinian leaders.

Mr Maliki told Sputnik that Palestine will reject any proposal for the Israeli-Palestinian settlement that fails to recognize Palestine as an independent state.

The relations between Israel and Palestine have been shattered for decades. Palestinians seek diplomatic recognition of their independent state on the territories of the West Bank, including East Jerusalem, which is partially occupied by Israel, and the Gaza Strip.

The Israeli government refuses to recognize Palestine as an independent political and diplomatic entity, and builds settlements in the occupied areas, despite objections from the United Nations.