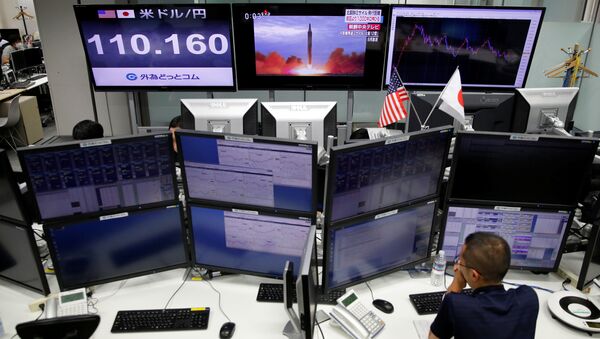 © REUTERS / Toru Hanai
Subscribe
The OECD is urging Japan to hike its sales tax to 26 percent in place of a planned increase to 10 percent this year, despite concerns that such a dramatic move could stifle consumer activity and hurt Japan's already-fragile economic growth.

Kristian Rouz — The Japanese government has reiterated that it will increase the sales tax this year in an attempt to boost fiscal revenues. The planned tax hike has been the focus of a heated debate for months, and this week, the Organisation for Economic Cooperation and Development (OECD) said Tokyo should increase its sales tax more than threefold to make up for its budget deficit.

In a report Monday, the OECD said Japan needs to take urgent steps to improve its fiscal sustainability, as the island nation's public debt-to-GDP ratio stands at roughly 236 percent, exceeding even that of Greece. Meanwhile, economic growth, business activity, and inflation remain subdued.

OECD economists said Japan's sales tax should stand at 26 percent — compared to the current 8 percent, and above the scheduled hike to 10 percent slated for October 2019.

"Achieving a sufficient primary surplus through the consumption tax alone would require raising the rate to between 20 percent and 26 percent, above the 19 percent OECD average," the Organisation said.

Prime Minister Shinzo Abe has promised to gradually improve Japan's public finances during his time in office; his goal is to generate a sustainable fiscal surplus by 2025.

However, Abe has repeatedly pushed back on the calls to ramp up tax hikes, as a previous sales tax increase from 5 percent to 8 percent hurt economic growth and nearly triggered a recession back in 2014 by hurting consumer demand.

Japanese government officials said the planned tax hike could be used to redistribute some of the public wealth in the country. As part of the move, Japan will provide free early-childhood education.

"We will increase the consumption tax rate from 8 percent to 10 percent this October," Finance Minister Taro Aso said at the IMF meetings in Washington. "Through this tax rate hike, we will not only achieve fiscal consolidation over the medium- to long-term, but also realize inclusive growth."

Still, there is speculation PM Abe could postpone the increase in sales tax yet again due to concerns about possible adverse effects on economic growth.

However, the OECD said Japan's sales tax is the lowest among advanced economies, and its increase could immediately improve the nation's public finances because sales tax it a 'relatively reliable revenue source'.

The OECD also said Japan should reduce its debt-to-GDP ratio to 150 percent by 2060 — either by boosting economic growth, consolidating its budget, or, ideally, both.

The Organisation said, however, that a sales tax increase is among the least harmful fiscal tools for improving budget performance. However, Japan's experience from 2014 suggests otherwise, and PM Abe has reportedly expressed concern that the combination of low inflation and higher consumption taxes could stifle the activity in Japan's services sector.

"Don't do dramatic changes, you can just go 1 percent every year, every year, slowly, and this can gradually improve the fiscal situation over time," Gurria said.

Meanwhile, OECD experts also suggested that the Bank of Japan (BOJ) should postpone any possible increases in base interest rates or its plans, if any, to end its multi-billion dollar bond-buying programme.

Analysts stressed a combination of loose monetary policies and a tightening on the fiscal side could work better for the Japanese economy than the other way around — which would be low taxes and higher borrowing costs.