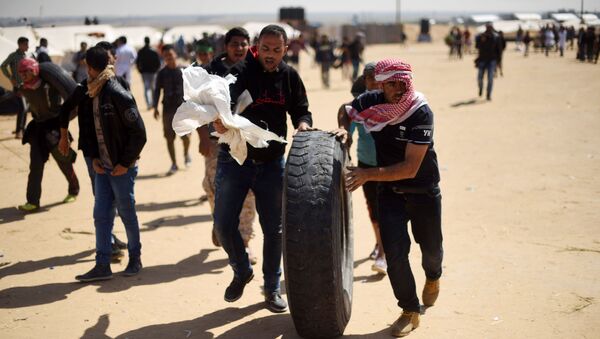 © Sputnik / Ahmed Abed
/
Go to the mediabank
Subscribe
International
India
Africa
Israel announced earlier this year that it would withhold some $138 million in revenue to the Palestinians, which Israeli officials worked out is the amount that the PA spends on stipends for terrorists

The Palestinian Authority's (PA) Prime Minister Mohammad Shtayyeh has asked the Russians to put pressure on Israel regarding the tax cuts.

Back in early February, the Palestinian Authority said it rejected its regular monthly tax transfer from Israel to protest an Israeli decision to deduct sums of money the Palestinians allegedly pay to imprisoned terrorists and terror suspects, as well as the families of those killed in attacks against Israelis.

The freeze of funds was expected to deal a heavy financial blow to the cash-strapped Palestinian leadership, already weakened by recent US cuts of more than $200 million in bilateral aid.

According to Israel, the stipends to prisoners’ families encourage violence. Palestinians describe the payments as an important form of social welfare and say they are responsible for their citizens.

Palestinians were hoping that the move would put pressure on Israel to reverse course. Israel and Palestine have been locked in border and sovereignty disputes for several decades. Currently, Palestine is seeking independence and wants to establish East Jerusalem as its capital. Palestine remains only partially recognised as a state and claims the territories of the Gaza Strip and the West Bank, including East Jerusalem.

Under a plan worked out by the United Nations in 1947 to quell the conflict, most of the West Bank and Gaza was turned over to Palestine. However, Israel seized the then-Jordan-controlled West Bank along with East Jerusalem during the 1967 Six-Day War.

In 1980, the Israeli parliament adopted the Jerusalem Law proclaiming the entire city as Israel’s undivided capital. Most of the international community does not recognise the annexation and believes the status of Jerusalem and the West Bank settlements requires mutual agreement with the Palestinians.