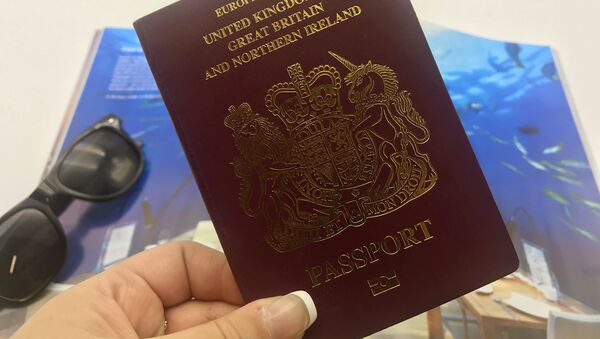 CC BY 2.0 / Holiday Gems / A red UK European passport in focus, in front of a travel brochure and some black sunglasses
Subscribe
International
India
Africa
MOSCOW (Sputnik) - Foreign Secretary Jeremy Hunt told the BBC broadcaster on Monday it would make him "very uncomfortable" if Shamima Begum, who had married a member of the Daesh* terrorist organisation received legal aid from the United Kingdom to claim back her UK citizenship.

"On a personal level, it makes me very uncomfortable because she made a series of choices and she knew the choices she was making, so I think we made decisions about her future based on those choices," the foreign secretary was quoted as saying.

At the same time, Hunt reportedly said that the decisions on legal aid were "independent from politicians."

However, his views have not been echoed by Jeremy Corbyn, the leader of opposition Labour party, who reportedly pointed out that Begum was a British citizen and had a right to apply for legal aid.

His remarks come after Sky News reported earlier in the day that the family of Begum had applied for taxpayer-funded legal aid, although the Daily Mail newspaper reported on Sunday that Begum had already been granted this request.

Daesh Bride Shamima Begum Given Legal Aid to Fight for British Citizenship
Begum left the United Kingdom in 2015 to join the Daesh in Syria, where she married a Dutch citizen. In February, Begum was discovered by a UK reporter in a refugee camp in Syria and said in an interview that she wanted to return to the United Kingdom.

UK Home Secretary Sajid Javid said in late February that Begum would be stripped of her UK citizenship. It was initially reported that Begum may have had Bangladeshi citizenship, but this was later disproved by the Bangladeshi Foreign Ministry.

When the journalist found Begum, she was pregnant, but her child died soon after birth.

Begum's story has become widely reported amid a larger discussion on what European countries can or should do about their citizens who had left to join the Daesh and would now like to return.