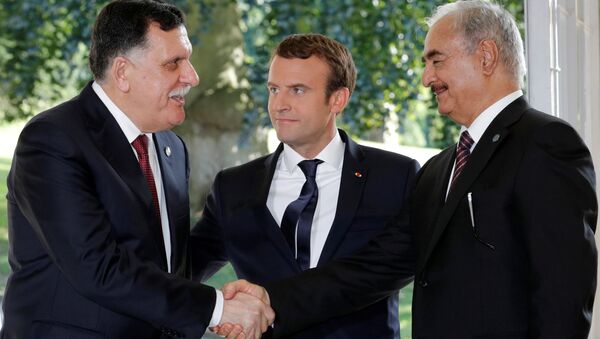 © REUTERS / Philippe Wojazer
Subscribe
Earlier, a French diplomatic source rejected claims that Paris was on the side of Marshal Khalifa Haftar and his Libyan National Army troops in the current conflict, reiterating French support for the UN-backed Tripoli-based Government of National Accord and denying that it had advance knowledge of Haftar's plans to launch an offensive on Tripoli.

France would like to see the return of 'stability and order' in Libya under Marshal Haftar, The Libya Observer has reported, citing a French Foreign Ministry source speaking to Le Monde.

According to the source, despite appearances, there is no ambiguity in Paris' attitude toward Haftar, with the marshal seen as 'part of the solution' in Libya since his forces control over 80 percent of the war-torn country's territory.

The source stressed that there was no military solution to the conflict, noting that the recent LNA offensive on the GNA capital has only served to undermine peace efforts.

Paris Denies 'Secret Plan' for Haftar, Reiterates Support to GNA - Reports
Le Monde characterised France's position on the LNA's Tripoli offensive as "the ambiguous official French position," pointing to French-Italian tensions on the Libyan issue over Paris' quiet support to Haftar starting in 2016 under the justification of the common fight against terrorism, with these efforts becoming particularly prescient following the 2015 Paris attacks.

Haftar's forces have played a key role in efforts to cleanse the areas of Libya under the control of the Tobruk-based government of terrorists, taking on not only Daesh (ISIS)* and al-Qaeda,* but also so-called 'moderate' Islamist forces such as the Muslim Brotherhood.*

Speaking to Le Monde, Wolfram Lacher of the German Institute of International Affairs & Security think tank suggested that contrary to French leaders' recent claims, Paris was "not surprised by the Haftar offensive on Tripoli." Just as importantly, Lacher noted, Paris, unlike Berlin and Washington, avoided making a "unilateral declaration" about Haftar's role in the latest skirmishes. "France has invested too much in Haftar, and does not want to lose her investment," the researcher stressed.

EU Parl't Head Reminds France About Role in Gaddafi's Overthrow Amid Libya Chaos
The long-running chaos in Libya escalated earlier this month after Marshal Haftar announced an offensive on Tripoli, prompting the GNA to announce a mobilization for a counteroffensive. GNA Prime Minister Fayez al-Sarraj has ordered the arrest of Haftar and his LNA allies. The LNA, meanwhile, has accused the GNA of allying itself with terrorists.

Libya collapsed into anarchy in 2011 following a NATO-led campaign of airstrikes in support of rebels seeking to topple the government of long-time leader Muammar Gaddafi. The turmoil prompted competing militias, criminal gangs and terrorist groups to establish control over wide swathes of the country. The largest militias formed two separate governments, the eastern Tobruk-based government, supported by Haftar and the LNA, and the western UN-backed GNA, based in Tripoli.