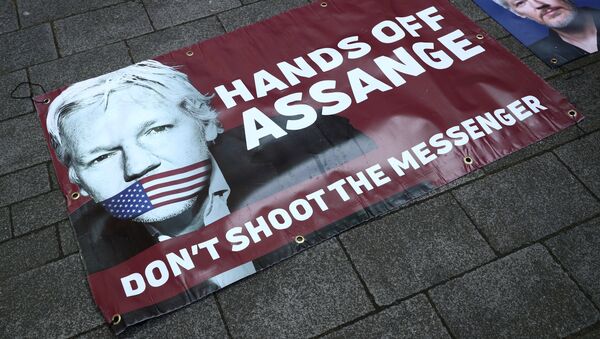 The US government’s affidavit for WikiLeaks founder Julian Assange was made public Monday, detailing exactly what criminal actions for which Washington investigators seek to prosecute him.

However, Brown is forced to admit that Assange and former US Army intelligence analyst Chelsea Manning "took elaborate measures to conceal their communications, mask their identities, and destroy any trace of their conduct, using, for example, encryption and anonymization techniques, and erasing and wiping data. For this reason, the facts are derived in large part from forensic analysis of available computer data, remnants, or unalterable systems."

"The charges in this criminal complaint focus on a specific illegal agreement that Assange and Manning reached in furtherance of Manning's illegal disclosure of classified information," Brown wrote. "As explained below, investigators have recovered Internet ‘chats' between Assange and Manning from March 2010. The chats reflect that on March 8, 2010, Assange agreed to assist Manning in cracking a password stored on United States Department of Defense (DoD) computers connected to the classified Secret Internet Protocol Router Network (SIPRNet). Manning, who had access to the computers in connection with her duties as an intelligence analyst, was using the computers to download classified records to transmit to WikiLeaks."

Included at the back of the affidavit are all of the chats the DOJ recovered from Manning's computer, and on which they base the entirety of their evidence that Assange helped Manning obtain the materials for her leaks — evidence they admit is largely "circumstantial."

"Cracking the password would have allowed Manning to log onto the computers under a username that did not belong to her. Such a deceptive measure would have made it more difficult for investigators to determine the source of the illegal disclosures. While it remains unknown whether Manning and Assange were successful in cracking the password, a follow-up message from Assange to Manning on March 10, 2010, reflects that Assange was actively trying to crack the password pursuant to their agreement," the court filing states.

Assange was arrested last week by British police for having jumped bail in 2012 when he was wanted for questioning in Sweden in connection with a sexual assault investigation. Believing he would be extradited to the US, where DOJ officials had stated they were investigating him, Assange sought asylum in the Ecuadorian embassy in London, where he remained until Quito removed his asylum status, permitting British police to arrest him. He faces an extradition hearing next month.

Manning has also been under lock and key in an Alexandria, Virginia, jail since March 5 for failing to testify before a grand jury about her interactions with Assange leading up to her 2010 disclosures to WikiLeaks of US government files she stole. Manning has maintained that she already answered all relevant questions about the topic in her 2013 court-martial trial, and Brown's affidavit for Assange makes extensive use of her answers during that trial. Manning has filed for release on bail, arguing the judge didn't follow proper procedure in condemning her to jail and that the facility can't provide for her medical needs.

The former analyst's leaked documents given to WikiLeaks include the infamous "Collateral Murder" video, which proved US officials lied about the 2007 murder of Iraqi civilians, along with several Reuters journalists, by US soldiers who gunned them down in an Apache attack helicopter. She also disclosed hundreds of thousands of US diplomatic cables that exposed the frank inner workings of international diplomacy to the world, and a collection of documentation proving a variety of other war crimes by the United States in Iraq. She was sentenced to 35 years in prison for her crimes, but US President Barack Obama commuted her sentence to seven years in detention as he left office in January 2017, and she was released that May.