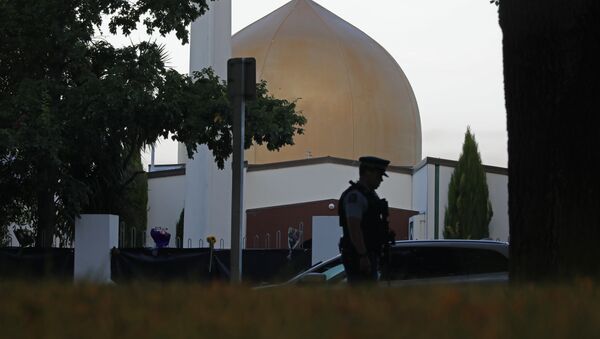 On Monday, six people accused with sharing the video of last month’s Christchurch attack appeared in a New Zealand district court. Two of them, a 44-year old local businessman and an 18-year old, both already in custody, were denied bail. The four others are not being held.

Philip Neville Arps, director of Beneficial Insulation, a local company in Christchurch, smiled and winked at the public as he appeared in court, reported Radio New Zealand. Arps has reportedly shared white supremacist images in the past, and his company has used a sun wheel as its logo, which carries connotations similar to the Nazi swastika. Currently, the website for his company appears to be suspended. He was arrested in late March after sharing the video on March 16, reported the New Zealand Herald. Arps is the only defendant who has been identified publicly — the names of the other five have not been released by the court.

In 2016, Arps, joined by two other men, recorded a video while delivering pig heads to the Al Noor Mosque, one of the places that was later attacked in the March shooting, the NZ Herald reported. Followers of Islam do not eat pork, considering it unclean. In the video, Arps carries the box while commenting, "White power. I don't go to a mosque often; it should be f**king Molotovs." He was referencing Molotov cocktails, a type of improvised incendiary weapon.

For that incident, a local district court convicted Arps of offensive behavior and fined him $800. In another video following his conviction, Arps boasted about it, saying, "It was a deliberate attack, and deliberate offense against Muslims, were the judge's words. Obviously the judge knows me well."

The 18-year old was charged with sharing the video and a picture of the Al Noor Mosque, with the caption "target acquired." USA Today reported that Police Prosecutor Pip Curie opposed bail for the suspect, pointing to the concerning nature of the content he had posted on social media.

According to Section 61 of New Zealand's Human Rights Act of 1993, it is illegal to spread content, whether in writing or via electronic communication including TV and radio, which is "threatening, abusive, or insulting."

Fifty people were shot dead and dozens more injured when a 28-year-old Australian citizen opened fire during Friday prayers at Al Noor Mosque and Linwood Islamic Centre in New Zealand on March 15 and livestreamed the attack on Facebook. A few days later, the social media giant released a statement announcing that within 24 hours of the attack, the company blocked about 1.2 million attempts to upload videos of the incident to its platform.

Arps' next court date is scheduled for April 26. All six defendants could face up to 14 years in prison if they are found guilty.