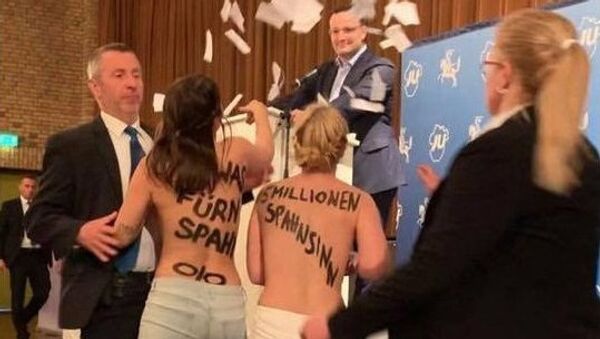 The group Femen has gained international fame by flashing their assets to protest politicians and clergymen around the world. This time they decided to undress in order to denounce Germany’s health ministry over a plan to pay about five million euros for a study about the emotional consequences of abortions.

Femen’s half-naked activists disrupted an address by German Health Minister Jens Spahn in the northern German city of Meldorf when they stormed onto the scene throwing paper notes at the official.

It was supposed to be a symbol of money the government is “wasting” on the study of the emotional consequences of abortions. The German outlet Focus reports that on these notes, the activists wrote their ideas about how the 5 million euros the Health Ministry allocated for the research could be spent.

The women also had messages "My stomach is mine" and "My Body my Choice" painted on their upper body and chanted a version of an old German hit "Wahnsinn" (Insane), playing on the politician’s name and singing "Spahnsinn."

“Why are you sending women to hell?" they screamed.

The security guards quickly dragged the half-naked protesters away, while the minister downplayed the incident with a joke to the applause and laughter of the audience.

"Taking your clothes off won't get you very far with me. This does nothing for me”, said the openly minister who is married to his partner.

His response prompted criticism from Femen, who accused the minister of harassing their male photographer. According to them, he allegedly said that “the young man, collecting the jackets, who filmed the whole thing, should have undressed”.

“He would have had more success with me”, Spahn allegedly joked.

Activists have demanded to abolish paragraph 219a of the Criminal Code, regulating how information about abortions might be spread.

It has already caused debates between the government coalition partners, the Social Democrats and Angela Merkel’s conservative Christian Democratic Union with its Bavarian sister party Christian Social Union. The SPD wanted to remove it completely, while the Union refused to do so. However, both parties agreed that eventually physicians and clinics might perhaps advertise on their websites that they perform abortions.  Amid these debates, the Health Ministry received five million euros for a 3-year study (2020 to 2023), designed to find out the "frequency and severity of psychological consequences of abortions".