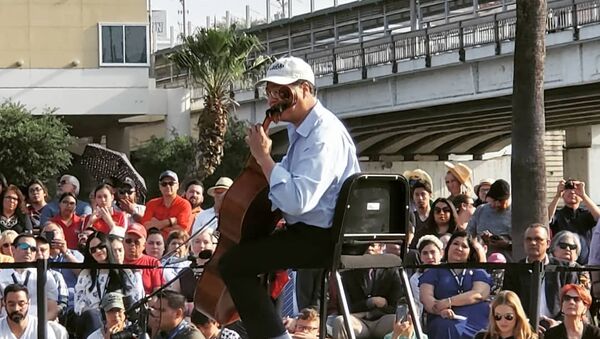 The performance was a part of a Bach music project famed cellist Yo-Yo Ma kicked off in August 2018 in a bid to promote "Bach's ability to speak to our common humanity."

On 13 April world-renowned cellist Yo-Yo Ma gave a performance in the US, in a park in Laredo near the Juarez-Lincoln International Bridge that connects the United States and Mexico, playing Bach's "Suite No. 1 for Unaccompanied Cello", NPR News reported.

The performance was dedicated to a celebration of the relationship between the two border cities: Laredo, Texas, and Nuevo Laredo, Mexico, according to The Hill.

In August 2018, Yo-Yo Ma began a two-year tour to perform Johann Sebastian Bach's suites for solo cello in 36 locations around the world, according to Bach project website.

The celebrated musician has visited the US, Germany, Canada, India, Puerto Rico and Mexico as part of the ongoing musical celebration

According to the performer's schedule, in 2019 he will give concerts  in Peru, Chile, Spain, Austria, Greece and Australia, finishing his two-year journey in New Zealand's Christchurch, a city traumatized by the March gun massacre at two mosques, which saw 50 people killed.

"When we're defining culture, it's often about how you can turn something that's not yours into your own. I always felt that Bach was my music — I lived my whole life living and experiencing this music almost every day. It's in my skin, it's in my bones, it's in my memory – it's in all my experiences. And I believe that until we stop becoming human, Bach's music is going to be continually listened to, because of the kind of understanding that he brings to human nature. It is one way that #cultureconnectsus.”… New video: The Culture of Us, featuring YOUR contributions and the Prélude to Bach’s Cello Suite No.1. Watch on @applemusic and listen to a new curated playlist at the link in the bio. (@sony.classical #SixEvolutions)