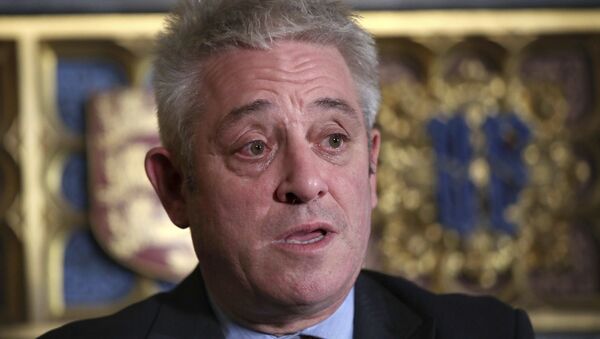 © AP Photo / Yui Mok
Subscribe
John Bercow, who has been speaker for nine years, has become one of the faces of Brexit and an inspiration for numerous memes with his attempts to bring order to the chaos surrounding the UK’s divorce from the EU. Although the days of beheading speakers are long gone in Britain, he could fall victim to a less violent, but still painful, plot.

A Tory MP has begun collecting signatures for a no-confidence motion against Commons Speaker John Bercow over allegations that he might not step down in June 2019 ahead of the summer recess as was earlier expected, The Telegraph reports. Bercow, who became an international social media hit during the Brexit debates, earlier announced that he was planning to look for a successor after holding the respected position for ten years.

However, with the Brexit deadline postponed until 31 October, the report by the British outlet suggests that he is not going to leave his role of maintaining order in the British Parliament and is “determined to see Brexit through”, according to a Tory source.

“He’s coming under quite a lot of pressure to stay in the chair while Brexit remains so uncertain”, another insider, close to Bercow, said, as reported by The Telegraph.

The newspaper also cites an unnamed lawmaker a saying that they “can't just stand by and let him ride a coach and horses through our constitution without registering a protest”.

While the discontent that led to the move against the speaker is brewing, some candidates are already queuing to compete for the post. Labour MPs Chris Bryant and Harriet Harman have already indicated their interest.

It is not the first time that the Commons speaker has reportedly become embroiled in a controversy about his political future. Claims about his alleged anti-Brexit “bias” recently brought him under fire. According to the BBC, he is viewed by some as being a Remainer trying to cancel Brexit or push towards a "soft" scenario.

Earlier this year, reports also suggested that he would not be offered a peerage, in breach of a 230-year-old tradition for his behaviour during the Brexit debates.

A spokeswoman for the speaker declined to comment, according to the Daily Express.

“In the event he has anything to say on his future plans, he will make an announcement to the House first”, she said, as cited by the outlet.

John Bercow, who was originally a Conservative MP, became Commons speaker in 2009. The title, which he is proud to hold, dates back to the 14th century and was quite a risky job in the past, as seven speakers have been beheaded over the course of history. Over the centuries, it evolved into a modern, and certainly safer, role as an independent referee intended to keep order and make sure that all MPs respect the rules of the Commons Chamber.

The role amid the Brexit chaos, together with his way of articulating phrases and names of politicians, including Labour leader Jeremy Corbyn, has grown popular on social media, turning him into one of the ordeal’s most recognisable figures. Regardless of what the future holds for Bercow and Brexit, his call to “Order!” has already been eternalised in memes and earned him the title of "Europe's surprising new pin-up" from The Sunday Times.