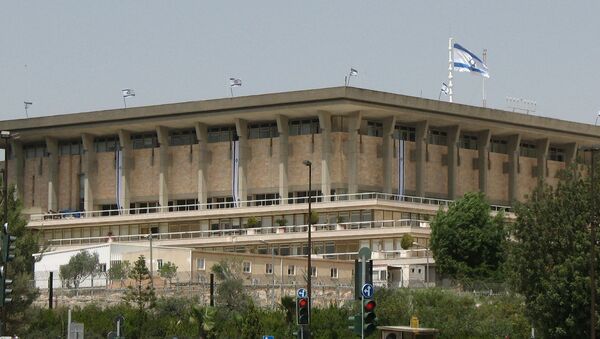 CC BY 2.0 / James Emery /
Subscribe
It remains unclear exactly how the ground-breaking political move would help to shelter the prime minister from criminal prosecution.

Israeli Prime Minister Benjamin Netanyahu's allies in the Knesset are reportedly considering modifying the political system of the nation to that of a presidential one as a means of saving the PM from criminal prosecution, Channel 13 news reported Friday.

According to the report, a fundamental change of the political system would ease legislation that will prevent legal action against Netanyahu, who is currently facing indictment on three corruption charges.

However, the report does not state how exactly switching to presidential governance would ease the lawmaking process or who raised this option in the Knesset.

Labour Member: Personal Win for Netanyahu? Political Fight Expected in Israel
The Times Of Israel report notes, however, that there was speculation that, following his victory in the parliamentary election this week, Netanyahu may condition his reentry into the new government on the adoption of a so-called French Law, legislation that would shelter him from criminal prosecution for as long as he remains the prime minister.

"Netanyahu has publicly given mixed signals about whether he will seek such legislation," the report says.

On Wednesday, Likud lawmaker Miki Zohar argued that Israeli prosecutors should drop charges against the prime minister, suggesting that indicting the newly-elected PM would amount to subverting the will of the people.

Case 4000 — the most serious — accuses Netanyahu of making "advanced regulatory decision" that benefitted the controlling shareholder of the telecom giant Bezeq: Shaul Elovitch. Elovitch's alleged illicit gains amount to hundreds of millions of dollars in exchange for positive coverage of Netanyahu by Elovitch's Walla news site, according to The Times of Israel.

In February, Tel Aviv Attorney General Avichai Mandelblit announced his intention to indict Netanyahu on all three cases with charges of breach of trust, fraud and bribery.

000000
Popular comments
Lawmaker Zohar is in essence and technically wrong in saying that "charges would subvert the will of the people". Only 1 in 4 of the adults that voted ticked the Likud party. Unknown as no media has printed on what percentage of Israeli's voted? Was it 30,40,50%? Such a minority is not technically speaking the will of the people. When Crimeans voted to return to Russia 98% voted of which 97% of those voters ticked the return box. Thats on every conceivable level the will of the people. Conversely Israelis have voted for a coalition to govern where a number of parties are represented in parliament. As such the leadership was not overwhelmingly voted for but against as its obvious many voted in protest. As the Likud party didnot win a overall majority. That would have required more than double the votes they received.

Rasputin002
14 April 2019, 08:38 GMT1
000000
Replace Nettles with his wife who is honest as they come , she may have stolen public funds to restore her home , but that is a woman's entitlement , I'm sure she would settle down in the top job eventually . Give her a go , it is the time for women to achieve high office , happening in all electoral pastures at the present time .