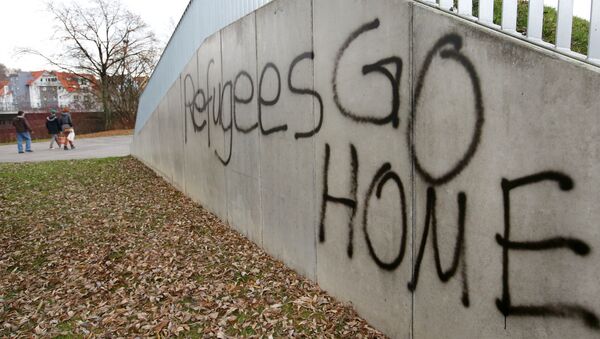 According to statistics published by the Federal Criminal Police Office, Germans are more likely to get hurt or killed in a crime committed by an immigrant than vice versa. At the same time, the number of serious offences, like homicides and assaults, committed by newcomers has increased in comparison to 2017.

One in 10 victims of serious crimes in Germany is assaulted by an asylum seeker or refugee, Die Welt reports, citing the Federal Criminal Police Office (BKA). Its 2018 report "Crime in the Context of Immigration” analysed statistics of murders, homicides, assaults, robberies, and offences against sexual self-determination and personal freedom. The research set out to determine how many crimes involved "asylum seekers and refugees", as well as people who are awaiting deportation or already have a residence permit.

Spike in Murders and Brutal Attacks

The research suggests that Germans are significantly more likely to become victims of a crime committed by an immigrant than vice versa. Last year, 102,000 victims of serious crimes were assaulted by migrants. This number has increased by seven percent since 2017.

The spike is more drastic when it comes to murder and manslaughter involving foreign perpetrators and German victims. 230 Germans were killed, which is twice as many as in 2017. However, the outlet noted that the statistics service (PKS) of the criminal police evaluates data only after an investigation is over, so the 2018 stats include the victims of the Islamist attack in Berlin in December 2016.

Sexual Assaults By Refugees on the Rise

The number of Germans sexually assaulted by asylum seekers and refugees also spiked to 3,260. In total, almost half of victims of serious crimes by foreign perpetrators (46,336 out of 101,956) were Germans. This is 19 percent more than in 2017.

Data relating to crimes against asylum seekers or refugees allegedly assaulted by a German suspect showed that 8,455 foreigners were victims (24 per cent more than in 2017).

Xenophobia Is No Reason

Notably, in 2018, only 18% of foreign victims were hurt or killed by a German suspect. As the newspaper points out, the report suggests that people seeking asylum are mainly attacked by those with a similar background.

READ MORE: At Least 10% of Crimes in Germany Committed by Migrants — Bavarian Police

The refugee policy and “open borders” approach, in particular, have prompted criticism against Angela Merkel’s government. European countries have been experiencing a severe migration crisis since 2015 due to an influx of thousands of migrants and refugees fleeing the Middle East and North Africa. Germany has accepted hundreds of thousands of migrants. However, over the years, the number of newcomers has dropped. According to the police, there were 300,000 asylum seekers and 697,000 refugees in Germany in December 2018.