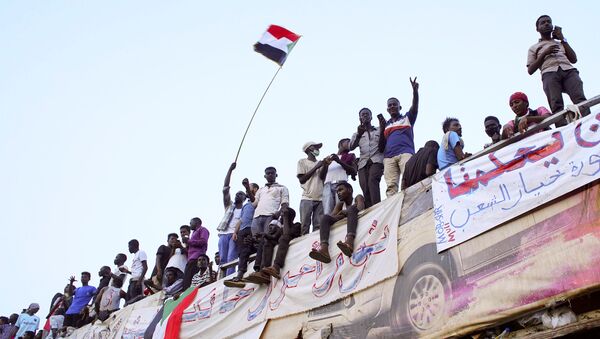 MOSCOW(Sputnik) - Sudan's paramilitary Rapid Support Forces (RSF), which are part of the Armed Forces, called for forming a program of power transition of three to six months amid the unrest in the country and subsequently hold fair and transparent elections, the RSF said in a statement, shared with Sputnik.

According to the statement, the core demand of the rapid transition support forces is that the power transition period in the country must not exceed more than 6 months.

"To create a clear transitional period program, not exceeding three-six months, and, due to it, reconsider the constitution via an editorial committee, including all Sudanese forces", the statement read. "To carry out free and fair elections with the participation of local and international observers in line with electoral law, on which the interested parties will agree", the statement added.

"To form a transitional council which would include military [officers] and the council of ministers of the civilian government", the statement stressed.

On Friday, Head of Sudan's Transitional Military Council, Defense Minister Mohammed Ahmed Awad Ibn Auf, announced his resignation, a day after starting work in this capacity. The Sudanese opposition has previously announced the continuation of the protests in crisis-hit African country, despite the overthrow of President Omar Bashir, demanding an immediate power transfer to a civil government.

Africa
Head of Sudan's Military Transition Council Ibn Auf Resigns - Reports
Sudan has seen months of protests that erupted in the country in December. The rallies were initially triggered by the rise in prices for bread and other consumer goods that greatly increased the vulnerability of Sudanese citizens. The protests then took on a new dimension as Sudanese citizens started calling for the resignation of Bashir, who has been in power for nearly 30 years.

Mohammad Youssef, a member of the secretariat of the opposition Sudanese Professionals Association, has told Sputnik that a trial of Sudan's President Omar Bashir, detained earlier amid anti-government protests in the African country, should be held in Khartoum, but with the participation of the International Criminal Court (ICC).

Africa
EU Calls for Power Handover to Civilian Transitional Govt in Sudan
"We support the idea of holding the trial of Bashir in Khartoum with the ICC participation, in order to prosecute him for all crimes, not just those committed in Darfur. When we have a democratic government, we will try Bashir. [Sudanese Defense Minister Awad Mohamed Ahmed] Ibn Auf and those who are with him, have no right for that, we will not recognize it", Youssef said.

The Sudanese military council, currently governing the country, said earlier in the day that it would not transfer Bashir to other countries and he would face justice in Sudan.